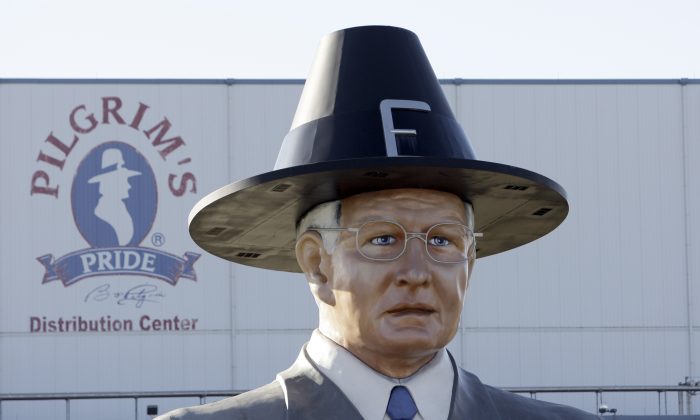 A statue of Pilgrim's Pride founder Bo Pilgrim is displayed outside the company's distribution center near Pittsburg, Texas on Dec. 2, 2008. Brazilian beef producer JBS SA said it would buy a majority stake in Pilgrim's Pride for $800 million. (AP Photo/LM Otero, file)
US

Pilgrim’s Pride Corporation—also known as Pilgrim’s—announced on April 26 that “4,568,080 pounds of fully cooked chicken products” are subject to a Class I recall.

According to the USDA‘s website, a Class I recall “is a health hazard situation” where the use of the product “will cause serious, adverse health consequences or death.”

Materials including plastic, wood, rubber, and metal may have contaminated chicken products that were produced for almost a two year period: August 2014 through March 2016.

Pilgrim’s Pride’s records show that the defective products have been shipped nationwide and have been purchased by schools.

This massive recall is an expansion of an April 7, 2016 recall of chicken nuggets, amounting to a total of 40,780 pounds of product.

Pilgrim’s Pride proudly states on their website that they supply 1 in every 5 chickens in America.

While, as of April 27, there have been no reports of illness or adverse health reactions, consumers are urged not to ingest the products and to discard them or return them to the place of purchase.

A complete list of recalled products is available here, with their labels visible here.