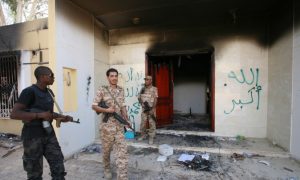 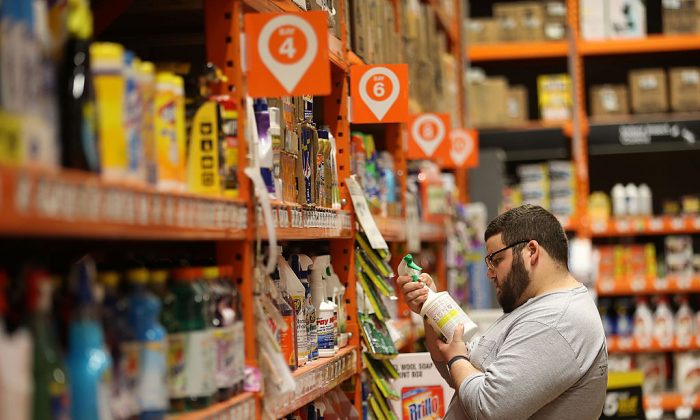 Hector Ponte shops for cleaning supplies in a Home Depot store on May 17, 2016 in Miami, Florida. (Joe Raedle/Getty Images)
US

Americans More Upbeat About Own Finances Than Economy

WASHINGTON—Americans are of two minds about the economy in the midst of an election race that largely hinges on the issue. They are strikingly pessimistic about the national economy yet comparatively upbeat about their own financial circumstances.

Just 42 percent of adults describe the U.S. economy as good, according to a survey released Wednesday by The Associated Press-NORC Center for Public Affairs Research. But two-thirds say their own households are faring well.

The divide suggests that despite their own financial gains, many people worry about risks beyond their control — from a volatile stock market to another economic downturn. Just a third say they’d be very confident of finding another job if they were laid-off — a sign of vulnerability even though the Great Recession officially ended nearly seven years ago.

Some of the difference also reflects political views and education levels: Republicans are far more negative about the economy as President Barack Obama finishes his second term. And college graduates are more sanguine about a recovery that rewarded them while largely neglecting workers without college degrees.

The nation’s unemployment rate has reached a healthy 5 percent, and workers’ pay shows tentative signs of accelerating after years of barely budging. Auto sales hit a record in April. Housing and construction are rebounding. Americans are treating themselves to more restaurant meals.

But for every gauge of the economy that’s pointing up, another has become cause for unease.

Hospitals have become dominant employers in most cities, yet health care costs are outpacing pay. Foreign imports have kept clothing and home appliance prices affordable. But those low-priced imports have cost U.S. jobs that in many cases haven’t been replaced. Across the country, the low-educated are struggling.

And nothing has ignited the robust economic growth that Americans remember enjoying until the Great Recession struck in late 2007. The United States has endured a dreary recovery from the worst downturn since the Great Depression. Just 23 percent of Americans say they think the economy will improve this year.

Some view the slow growth as a sign that the economy has never escaped the threat of another downturn. For years, they have seen the political class feud over how to accelerate economic growth and extend more opportunities to people who have been left out, with little to show for it.

“It’s just real shaky right now,” said Dorothy Mszanski, 60, a former steelworker who had to retire on disability. “It’s like nobody can figure out what to do.”

Living outside Youngstown, Ohio, Mszanski sees her family’s situation as relatively stable. Her husband works an auto body and paint shop. The couple has built up retirement savings after years of work and raised three adult children. Yet Mszanski fears economic risks that could upend their lives.

A stock market crash would deplete her husband’s 401(k) account. Her medical bills could keep soaring to impossible heights, a challenge she is already straining to handle.

“I’ve had chronic back pain, and I’m a diabetic and I’m on oxygen 24-7,” she said. “If my medication keeps going up, there will be a time that I won’t be able to afford to eat or buy my medicine. So what are you going to do?”

That anxiety remains rooted in many communities even as Americans see some economic gains. The more than 40 percent who describe the economy as good compare with just 26 percent who said so in an October 2013 AP-GfK survey.

Doubts about the economy lie at the heart of the split over which presidential candidate is best equipped to lead the country: Donald Trump, the real estate mogul whose aggressive economic nationalism has made him the presumptive Republican nominee, or Hillary Clinton, the Democratic front-runner who has campaigned as a get-things-done policymaker.

Sentiments about the economy tend to parallel Americans’ political views. With a Democrat having occupied the White House for seven years, Republicans with a dislike for Obama’s policies tend to express discontent with the economy.

Many Americans have seen their home values recover and have cut their mortgage bills by refinancing at ultra-low rates, thereby improving their personal finances.

Still, regardless of their own circumstances, history shows that voters tend to develop negative views of the economy during presidential election years, which typically dwell on economic shortcomings, said Diane Lim, a researcher at the Committee for Economic Development, a non-partisan think tank.

“If you turn on the news, you’re very aware that the economic recovery has not lifted everyone back to normal,” Lim said. “The campaign talk, of course, is going to emphasize the negative on either side.”

The divide also reflects the uneven nature of a recovery that has favored the wealthier and better-educated.

Just 2.4 percent of Americans with a bachelor’s degree are unemployed, compared with 5.9 percent of those with a high school diploma or less, according to the Labor Department. Nearly 60 percent of all income gains between 2009 and 2014 went to families in the top 1 percent of earners, according to analysis by Emmanuel Saez, an economist at the University of California, Berkeley.

The AP-NORC survey found that Americans with a bachelor’s degree or higher are closely divided on whether the nation’s economy is good (48 percent) or poor (52 percent).

But those with a high school education or less are much more likely to consider the economy poor (63 percent) than good (37 percent) and less likely to feel confident about their finances.

College graduates such as Walter Johnson, 77, are able to work past conventional retirement age. A civil engineer in Chicago, Johnson said he still works at his firm 35 hours a week, giving him a degree of financial security.

Yet he views the overall economy as struggling. Annual growth has averaged a mere 2 percent during the economic recovery, compared with the roughly 3 percent that was common for much of his lifetime.

A registered Republican, Johnson said he thinks a key to faster growth is persuading local banks to support small businesses and entrepreneurship, instead of requiring them to follow regulations more suited to global financial firms. He considers Trump the candidate for voters who value good jobs, like the construction workers he sees in Chicago.

“If he can tone his verbiage down a little bit and get some reasonable advisers, I’d vote for him, I really would,” Johnson said.

Many other Americans see Trump’s bluster as a potential threat to the economy.