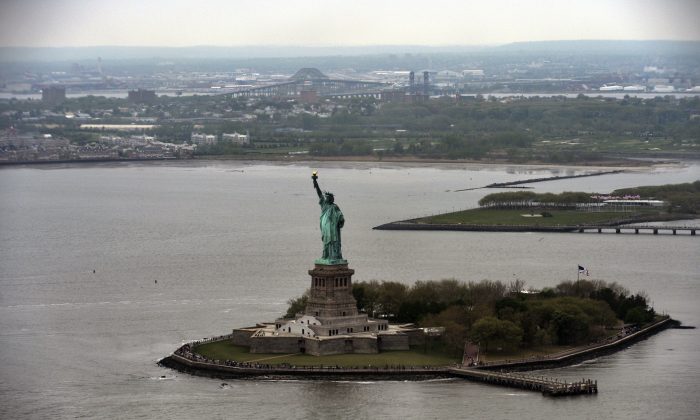 The Statue of Liberty is pictured in New York, on May 14, 2014. The statue, designed by Frederic Auguste Bartholdi and dedicated on October 28, 1886, was a gift to the US from the people of France. (JEWEL SAMAD/AFP/Getty Images)
News

America Is Not a Tribe: The Many Citizens Under Lady Liberty

A scholarly, gentle, married couple I got to know this year started the long clock on becoming American citizens. They are asking for asylum before their visas expire. Since they are entering what can be a fraught and tricky legal maze, I won’t say much more about them here. All I know is, if they walk through that years-long maze to the other side, America will benefit.

To me, naturalization ceremonies are touching. Group naturalization ceremonies are a seasonal ritual, timed for America’s birthday. People who become Americans enrich us all. In Atlanta, 1,100 new Americans took the oath July 2 in Turner Field. Around the country, 7,800 people from scores of countries are becoming naturalized, according to U.S. Citizenship and Immigration Services.

It’s strange how ambivalent America can be about new Americans.

Our motto, written on the Seal of the United States, is “E pluribus unum,” or “out of many, one.” There is no such thing as being ethnically American. There is no tribe. We are the national equivalent of a family of choice.

Which ought to mean welcoming people who want to become part of this noble experiment. It was shocking to me that protesters in San Diego on Tuesday blocked buses carrying women and children who had crossed the southern border. One protester said she thought it was her patriotic duty to stand up and repel them. Ahem, women and children. Ahem, refugees.

I hate to say it but people in the Middle East would have handled that better. I know they would, because they are. Lebanon and Turkey and other neighbors of Iraq and Syria have extended a huge helping hand to people who cross their borders. Those people are not crossing out of curiosity. It’s life or death. The same is true for many of our migrants who crossed the border illegally.

But I digress. This week’s new citizens did everything right. They got in line. They are a completely different group than those who cross the Rio Grande. When Lady Liberty raised her torch and said:

“Give me your tired, your poor,
Your huddled masses yearning to breathe free,
The wretched refuse of your teeming shore.
Send these, the homeless, tempest-tost to me,
I lift my lamp beside the golden door!”

She probably meant people who had the correct documentation.

Every earthly institution falls short of its poetry. Emma Lazarus, who wrote the huddled masses poem, “The New Colossus,” lived through the Civil War, when America broke apart over slavery. She wrote it to advocate for the thousands of exiles flooding into America in the 1800s. They were not all welcome.

Then as now, people feared that unchecked immigration would wreck the country. American culture, American values, American jobs were at risk from those huddled masses. They brought vice and crime. They brought dangerous terrorist ideologies. As Yogi Berra would say, it’s deja vu all over again.

An ugly streak of nativism reared its head then, and rears it again today.

But every American knows the huddled masses line by heart. Most Americans started out as huddled masses, even the first people who migrated from Asia. Even our quasi-bluebloods were probably the landless third son who had to go forth and seek his fortune.

What I am saying is, welcome, new Americans. We need you. We need to raise the torch a little higher and open our arms a little wider.

Lady Liberty’s promise and “out of many, one,” is really what we are all about.