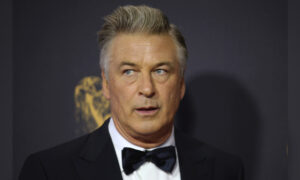 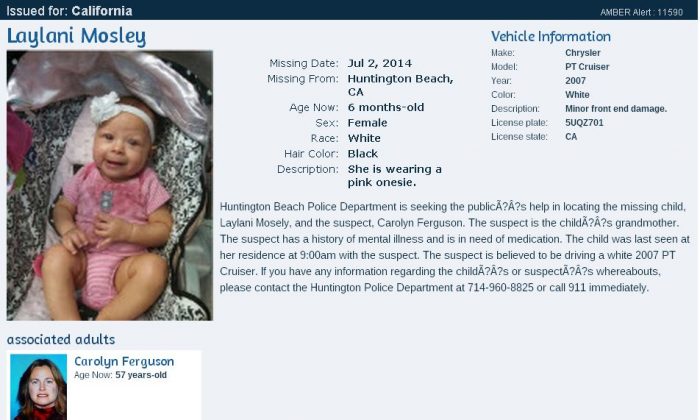 An Amber Alert was issued for a California girl, Laylani Mosley, who went missing on Wednesday evening. The suspect in the case is Carolyn Ferguson, the child’s grandmother.
US

An Amber Alert was issued for a California girl, Laylani Mosley, who went missing on Wednesday evening. The suspect in the case is Carolyn Ferguson, the child’s grandmother.

She drives a white 2007 PT Cruiser with a CA license number of 5UQZ701. The car has front end damage.

Ferguson has a history of mental illness and requires medication.

Here’s what the Amber Alert says in full: “Huntington Beach Police Department is seeking the public’s help in locating the missing child, Laylani Mosely, and the suspect, Carolyn Ferguson. The suspect is the child’s grandmother. The suspect has a history of mental illness and is in need of medication. The child was last seen at her residence at 9:00am with the suspect. The suspect is believed to be driving a white 2007 PT Cruiser. If you have any information regarding the child’s or suspect’s whereabouts, please contact the Huntington Police Department at 714-960-8825 or call 911 immediately.”

SAN FRANCISCO (AP) — A raging wildfire in rural Northern California that spread over 5 square miles and forced the evacuation of 200 homes in Napa County continues to grow, officials said Wednesday.

By early evening, the Butts Fire in remote Pope Valley grew to 3,800 acres from 3,200 acres, said Daniel Berlant, a spokesman for the California Department of Forestry and Fire Protection. The blaze is not threatening any major vineyards, Berlant and a spokeswoman for a vintners association said.

More than 1,000 firefighters were hoping to get a better handle on the blaze after they made progress overnight Tuesday, Berlant said. But fire activity increased about noon Wednesday as temperatures again soared into the 90s and the blaze continued burning northeast into neighboring Lake County. The blaze is 30 percent contained, officials said.

“We’re hoping that once the sun goes down, the temperature will as well and the humidity will also rise to give us another chance to increase containment,” Berlant said.

Crews have requested more bulldozers from across the state to assist the dozen on site in strengthening containment lines, Berlant said.

The fire has damaged one home and four outbuildings. In addition to the mandatory evacuations, another 180 homes were threatened. No injuries have been reported, and the cause of the fire remains unknown.

The fast-moving blaze began Tuesday afternoon in Napa County. Within hours, it covered 600 acres and then spiked to 2,700 acres by late evening as it spread northeast. State firefighters and crews from Napa, Lake and Solano counties spent a second day working in 90-degree weather on Wednesday.

Similar high temperatures were expected again on Thursday. The fire exploded because of dry conditions across the state, Berlant said.