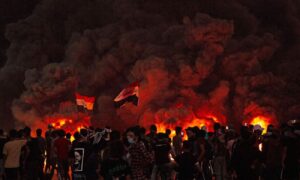 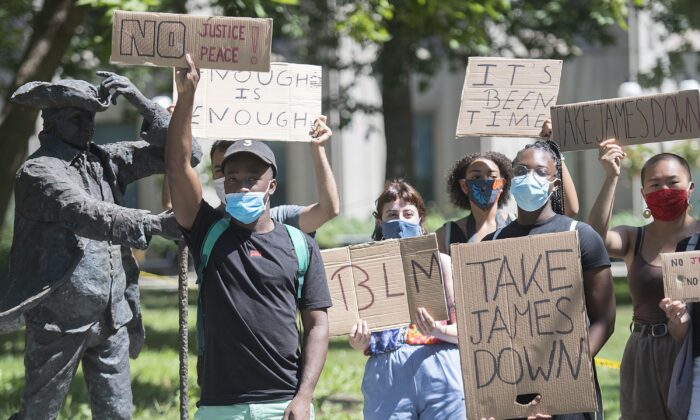 McGill University students protest next to the statue of founder James McGill on Aug. 1, 2020, calling on the university to take down the statue. (The Canadian Press/Graham Hughes)
Viewpoints

My 7-year-old son recently brought a worksheet home from school that listed the accomplishments of various activists, ranging from Malala Yousafzai to Greta Thunberg. Some had stories worth knowing.

Yousafzai, who was shot in the head by the Taliban for pursuing an education, has become a beacon of hope for girls in developing countries who are denied the basic right of education. People like this have stories to tell, of overcoming adversity and hardship and exemplifying uncommon fortitude despite their circumstances.

Learning from moral exemplars is laudable, as kids need to know their potential to overcome tyranny, even when their personal liberties are at stake.

But there was something disconcerting in the delivery of the message in my son’s worksheet. All of the individuals were defined primarily as activists, insinuating that somehow activism itself is the preeminent virtue and not personal triumph over adversity.

In other words, an implicit suggestion that activism itself should be the goal.

This begs the question about whether activism as a trait is worthy of such esteem.

In light of the fevered protests and social justice movements that have gripped major cities across North America in recent months, it’s worth examining the roots of the modern activist mindset and whether it contributes to the greater good.

Much of the activism promulgated today doesn’t encourage action on behalf of one’s independently formulated convictions but instead stems from an indoctrination to embrace and agitate on behalf of preordained social justice causes. It is consistently applied to a narrow band of accepted causes and has become increasingly authoritarian in its delivery. It’s always a demand and never a discussion.

The extreme ends of the environmental movement that call for an immediate abandonment of fossil fuels is just one example, where assumption and hyperbole outweigh fact and reality. It wholly lacks the spirit of cooperation and compromise that could result in a practical solution to complicated problems.

Our kids need to understand their responsibility to stand against injustice as a fundamental safeguard of democracy, but political engagement must be taught with humility and broad-mindedness, and not as a prescription. Social acceptance is the primary motivator for adolescents, and they can be easily swayed by the opinions of their peers. As such, they are susceptible to the influence and madness of the crowd, more so than their adult counterparts who have established their place in the world. This makes them vulnerable to the incomplete and sometimes incoherent ideologies of their educators.

We are now beginning to see the chickens of the education system come home to roost in the workplace. Debate over contentious issues isn’t allowed. What has taken its place is a call for “safe spaces” and a total unwillingness to engage in the battle of ideas. A recent example is the outrage among Penguin staff that the publishing house would dare to publish best-selling author Jordan Peterson’s latest book, “Beyond Order: 12 More Rules for Life.”

Apparently, some staff were left feeling “ambushed” by the news of the book’s imminent publication. There were tearful demands that Penguin refuse to publish the book.

Has the education system so failed these young adults that they exhibit such fragility? Do they believe that they only need to cry, shout, and agitate in an increasingly hostile manner in order to get their way? Paralyzed by fear and loathing, such an infantile response to the inevitable conflicts of life will not bear fruit nor move society forward.

This type of so-called social justice isn’t the noble activism of Martin Luther King Jr. or Gandhi, in which faith, personal sacrifice, and dignity were an intrinsic part of the equation. That nobility of purpose is absent in today’s social justice warriors, who mindlessly foist their underdeveloped ideas upon the world, unwilling to entertain any possibility that they may be wrong in their assumptions.

A Case for the Rational Mind

It seems to me that we aren’t in need of more social justice activists. The perpetually offended may find much with which to busy themselves, but they aren’t producing anything meaningful or remotely useful. If the world is going to get out of its current mess, we need a generation of critical thinkers empowered to formulate independent thoughts around complicated issues. The neurons of creativity, discipline, and morality need to be firing in the adolescent brain lest they continue to atrophy into petty narrow-mindedness.

Our society requires creators and self-reliant thinkers who can examine a full set of facts and make their own conclusions and resist the temptation to advocate for causes they don’t fully grasp. The ideas they hold and the causes they embrace should be developed through reflection and not indoctrination.

Instead of social justice warriors and their juvenile attempts to influence the world, we need forthright individuals unafraid to take part in the battle of ideas.

Ryan Moffatt is a journalist based in Vancouver, Canada.