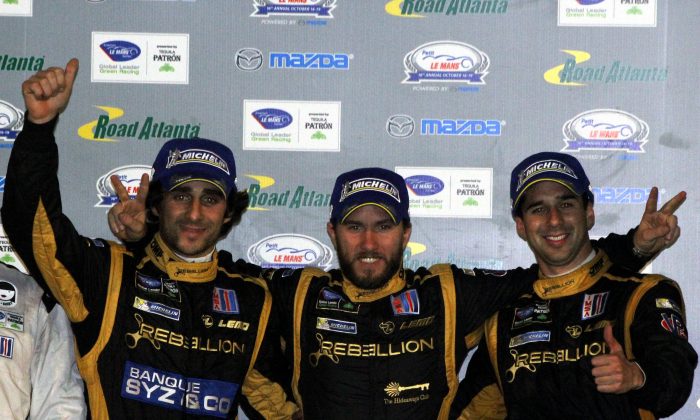 In only sixteen years on the calendar the American Le Mans Series’ Petit Le Mans gained legendary status around the racing world.

With ALMS morphing into USC next season, the 16th Petit le Mans had even greater stature as the last of its kind, the end of an era in North American motorsports. The team which won this race would be a part of racing history.

That team turned out to be 2012 winners Rebellion Racing.

In 2012 the Swiss-based Rebellion team came across the Atlantic to contest the only two North American endurance races which still had international appeal, the Sebring 12 Hours and Petit Le Mans.

The team planed to contest the entire 2013 ALMS season. Even after having to drop out early in the season to focus on building a new car for 2014 Rebellion still returned to defend its Petit Le Mans win, not for points but for prestige. A win at Petit is like a win at a famous European event, and as the final race of the ALMS era, victory meant that much more.

For Rebellion, the race had even more dimensions, as drivers Neel Jani, Nico Prost, and Nick Heidfeld, along with team manager Bart Hayden, explained at the post-race press conference.

First, their rival Muscle Milk Pickett Racing had beaten then in two of the three races they contested in 2013. Second, Muscle Milk had been sidelined by a collision early in the 2012 Petit, and Rebellion wanted to prove they could win over the full 1000-mile distance.

The race was as full of drama as any ten-hour sporting event contested by three dozen teams could be. With battles in the various classes for the race win and class championships, intermittent rain through the first half of the race, accidents, penalties, and dramatic comebacks, the race fulfilled its promise as an historic event.

Unfortunately the battle between Rebellion and Muscle Milk only lasted five hours.

Rebellion’s Neel Jani collided with a slower car early in the race, then fought back hard to try to catch the Muscle Milk car. The changing weather conditions kept both teams constantly adjusting strategy. Rebellion, once two laps down in 15th position, battled back into second and regained one lap. Then, at the five-hour mark, the Muscle Milk car developed an unsolvable overheating problem and had to withdraw.

The first five hours could accurately be described as epic, with emotional highs and lows, disaster and repair and resurgence. Through the final four-and-a-half hours the other classes kept on with the intense struggle, while Rebellion just reeled off a long string of perfect laps to finally take the repeat victory.

As team manager Bart Hayden explained it in the post-race press conference, “I felt last year that the fans were robbed slightly of the battle between Muscle Milk and ourselves for the full duration of the race. I was kind of hoping that we would be able to resume the battle this year for the full nine-and-a-half hours.

“Of course they [Muscle Milk] had a problem so that didn’t happen, and we gave ourselves a little trouble early to make life difficult, so to come back from that, to put the opposition under pressure and to win for the second time, it’s a tremendous feeling. It was The Objective—the only reason we came here. We didn’t come for points—it was to win.

Neel Jani took the first stint for Rebellion n what would be his last race with the team. The 29-year-old Swiss driver has been tapped by Porsche to drive in the factory’s new LMP1 program, a huge honor for Jani—and a significant loss for Rebellion. Jani had been with them since 2010.

Jani described his opening stint: The beginning was not easy at all; it was dry, wet, dry, wet enough but you still had to use slicks so it was kind of a gamble with the tires.

“It was also a question of how much do you race, especially on the wet tires so you don’t burn them so you can stay out as long as possible, because you never knew when the next rain shower would come.

“We were trying to go easy—especially in the beginning I was trying to go easy and not burn the tires, which unfortunately didn’t help because the rain didn’t come so we had to switch back to slicks anyway.”

Jani was very direct in his description of how he hit the #52 PR1 Mathieson car, which was exiting the pits just as Jani pulled out to overtake the DeltaWing climbing the hill towards Turn Two: “It was right in my dead spot behind the wheel arch on the side of the track and I never knew what I hit there.

“I think this shows a problem with the car—you just can’t see.” (Jani had mentioned the visibility problem after qualifying, saying it was one advantage Muscle Milk would have in traffic.)

“It was kind of a surprise, a shock, and I think we were very lucky in the end, not to have had a big crash. Look at Scott Sharp’s crash here a few years ago.

“From that point of view we were still lucky, I would say, and slowly we came back. We had a very good car, very good pace, the team did a god job of fixing everything and then my teammates took over and they did a god job to get back into the lead so I could just finish the race.”

Swiss-French driver Nicolas Prost has been with Rebellion since before it was called Rebellion, and he will stay with them in 2014. Prost took over from Jani, with knowing he would need to make up lost laps just to get close enough to contest the lead, but he wasn’t worried.

“To be honest when I go into the car I thought, ‘Okay, it’s going to be hard but we can do this,’ Prost told the assembled reporters. “I think we pushed really hard and we were looking really good when it was drizzling, taking a lot of risks pushing as hard as ever.

“The weather conditions—the Muscle Milk looked quicker, like it had even all week but when we got back a lap and a half. When I got out I felt we were back in the game and I was pretty much sure that Nick [Heidfeld] and Neel [Jani] would be able to close up the gap even more. Then [Muscle Milk] had a problem.

“To win here a second time is obviously a great feeling. A the beginning of the year I looked at the calendar, all the races we had and for me one objective was to win here again because we had a shot at the overall win, and I am really happy to win it again.

“It’s great for Rebellion and it’s great to end my career with this little guy [smiling and gesturing at Neel Jani] with a win because been we have been together forever and I am really happy to win today with him—and with him too, by the way,” [laughing and pointing at Nick Heidfeld].

Nick Heidfeld was the team’s closer. The 36-year-old German driver spent more than a third of his life in Formula One before moving to sports cars in 2012. He wasn’t part of the 2012 Petit-winning driver line-up, so the 2013 victory was high on his bucket list.

“Before I came here everyone said it was a fantastic event, and even though not being the oldest one on the calendar, it has a fantastic reputation; it is one o f the sports car races you want to win,” he explained. “On top of that it’s been the last ALMS race and that makes it even more special.”

Asked how he rated his Petit win among his long list of driving accomplishments, Heidfeld replied, “I regard this [sports car racing] as sort of my second career after Formula One. It’s very difficult to compare but if I want to put it somewhere I think it ranks quite high, for the reasons I explained earlier.

“That’s the way things go. I think we still deserve to win here. We had a couple other fantastic races here in the ALMS and it’s great to end it on a high.”

Sadly for North Americans, Rebellion Racing won’t be back in 2014. The team is focusing its efforts on a new LMP1 chassis, the R1, with which it will contest the World Endurance Championship. After having captured the privateer trophy in the 2010 Intercontinental Le Mans Cup and the 2011 and 2012 WEC (and having a lock on the 2013 title,) the team plans to stay with its strength.

North American fans lose out in the future, but Rebellion certainly served up some excellent racing in ALMS in 2013, and helped make the final ALMS Petit Le Mans a race worth remembering.

The American Le Mans Series name has been retired, but the excellent sports car racing will continue under its new title, the Tudor United Sportscar Championship. TUSC kicks off the 2014 series with the 52nd running of the Rolex 24 Hours at Daytona on Jan. 25-26. Tickets are available through the Daytona International Speedway website.