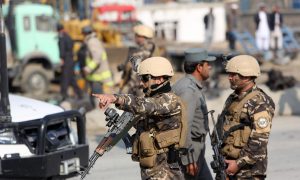 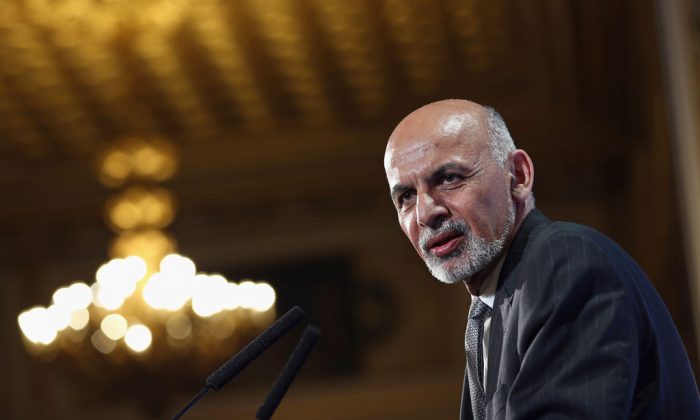 Afghanistan's President Ashraf Ghani speaks to delegates and ministers during the London Conference on Afghanistan on Thursday, Dec. 4, 2014, in London, England. The United States, Britain and other allies promised Thursday not to abandon Afghanistan's new government, responding to pleas by Kabul for continued support as international security missions wind down and Taliban attacks surge. (AP Photo/Dan Kitwood)
Middle East

At a one-day meeting of envoys from more than 60 countries, Afghan President Ashraf Ghani said observers who had predicted doom for Afghanistan as the international military presence wound down were wrong.

“History will not be repeated. We have overcome the past,” Ghani told diplomats at the end of the conference.

Ghani was elected in September in Afghanistan’s first peaceful transition of power, though he has yet to form a stable Cabinet.

He said he was confident Afghanistan would overcome its challenges.

“We hope that we will never need direct combat support (again), because the last thing we want is more blood,” he said. “Peace is a top priority for us.”

British Prime Minister David Cameron assured Afghans that “we are with you every step of the way.”

The 13-year international combat mission in Afghanistan ends Dec. 31, although Ghani has signed security agreements with Washington and NATO permitting a continued international military presence. Some 10,000 American troops will remain by the end of the year.

Insurgents have sought to destabilize Ghani’s government and unnerve international agencies with a series of high-profile attacks in Kabul.

Afghanistan came to the conference seeking reassurance it won’t be forgotten after most international troops leave. The West, in turn, wants to see a stable government and action to curb the corruption that has long plagued Afghanistan.

Economically, he conceded, “we have not done well. But that is the challenge we have inherited.

He signaled that he would fight corruption, telling international firms and donors “we are determined to do business differently.”

Afghanistan’s relations with neighboring Pakistan will be key to the country’s future.

Ghani’s predecessor, Hamid Karzai, frequently accused Pakistan of turning a blind eye to the Taliban and other militants carrying out cross-border attacks. Pakistan in turn blamed Kabul for failing to police its own borders.

In a sign of thawing ties, Ghani and Pakistan Prime Minister Nawaz Sharif met in Islamabad last month and Sharif pledged support for the Afghan president’s attempt to bring the Taliban to the negotiating table.

Sharif told the conference in London that the meeting had marked a “historic new beginning” for the two countries.

Over the last four years, the United States has sent Afghanistan’s government $8 billion in assistance, and Kerry promised Thursday to ask the U.S. Congress to approve “extraordinary” but unspecified levels of new aid through 2017. He also said Washington and Kabul are trying to open investment opportunities for Afghans in the U.S. by issuing multiple-entry visas for business travelers, students and tourists.

“We are committed to ensuring that Afghanistan can never again be used as a safe haven from which terrorists can threaten the international community,” Kerry said. “We know that the most effective way to advance this objective is to support Afghanistan’s political unity and its security.”

“The view is he represents a window of opportunity after the departure of Hamid Karzai,” who was seen as doing little to tackle corruption, Keating said.