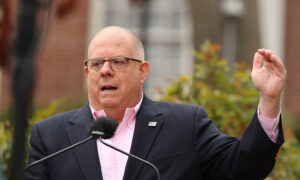 Maryland Gov. Hogan Claims Refusing to Wear a Mask Is not a ‘Constitutional Right’
0
Share Now
FacebookTweetParlerEmail
Copy Link
US

A hearing was held on Saturday for the alleged Fort Hood shooter, from his hospital room at the Brooke Army Medical Center in San Antonio, Texas.

Military psychiatrist Major Nidal Hasan is being charged with 13 counts of premeditated murder for the Nov. 5 shootings at Fort Hood military base. The shootings left another 34 people wounded.

Nidal was shot by a civilian police officer, ending the rampage.

Nidal's civil lawyer, John Galligan, told AP that he informed his client he is permanently paralyzed. Nidal has no feeling from the chest down and has limited mobility in his arms.

Prior to the shooting, Nidal had contact with a radical Islamic in Yemen, Anwar al-Awlaki, who praised the killings shortly following the attack.

Awlaki used to be an imam at a mosque in Falls Church, Va. where Nidal and his family used to worship. Awlaki was in a Yemeni jail until he was released last year and the two have remained in contact with each other through email.

Maryland Gov. Hogan Claims Refusing to Wear a Mask Is not a ‘Constitutional Right’
0