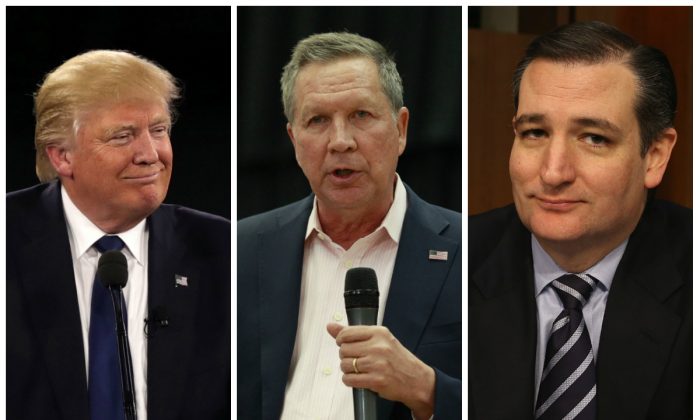 All 3 GOP Candidates Backtrack on Pledge to Support Nominee

As recently as March 3, the Republican presidential candidates agreed to uphold their pledge to support whomever wins the party’s nomination for the general election.

That pledge of support was proven null and void on March 29 at the CNN Republican Town Hall in Milwaukee, Wis.

Debate moderator Anderson Cooper asked the three remaining candidates whether they would stick by their pledge, and all three candidates deflected, wavered, or flat out said no.

I’m not in the habit of supporting someone who attacks my wife and my family.
— Ted Cruz

Donald Trump was the most direct with his refusal, saying, “No, I won’t,” and citing unfair treatment by the Republican National Committee and the party establishment.

When Ted Cruz was asked the same question he answered by defending his wife and family, referring to an unflattering picture of Heidi Cruz that Trump tweeted recently:

“I’m not in the habit of supporting someone who attacks my wife and my family … I think nominating Donald Trump would be an absolute trainwreck, I think it would hand the general election to Hillary Clinton.”

In response, Trump said Cruz “doesn’t need to support me,” and that Trump has “tremendous support right now from the people.”

All of us shouldn’t even have answered that question.
— John Kasich

John Kasich regretted signing the pledge in the first place. “All of us shouldn’t even have answered that question,” Kasich said.

The loyalty pledge was signed late last year when there were fears that Trump would break off from the party and run as an independent candidate.

Trump signed the pledge last September with the promise to uphold the conservative values of the party and to not run as an independent.