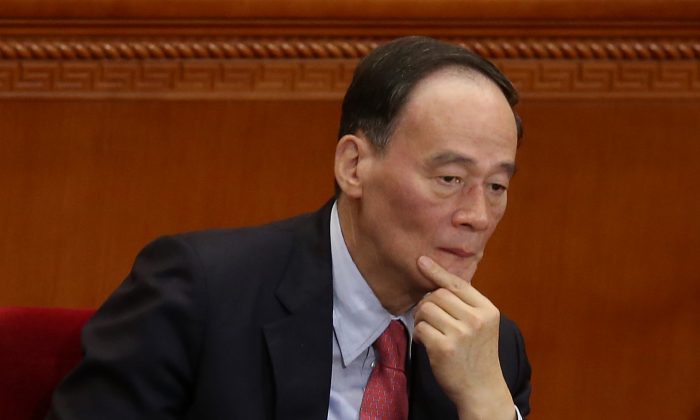 Wang Qishan attends the opening session of the National People's Congress on March 5, 2014. On Jan. 6, the anti-corruption watchdog headed by Wang announced that inspection teams will be sent to every Party department. (Feng Li/Getty Images)
China

All Departments in Chinese Regime Now Targeted by Anti-Corruption Investigators

The new year has seen a redoubling of the efforts by the Chinese Communist Party leadership to oust the faction headed by former regime leader Jiang Zemin. The Party’s anti-corruption watchdog announced on Jan. 6 that it will now scrutinize the entire governing apparatus of the Chinese regime.

A total of 47 inspection teams will be tasked to watch over all 139 Party and state departments for any wrongdoing, according to an announcement on the Chinese Communist Party’s disciplinary agency’s website. “Sending inspection teams to all departments is crucial to eliminating any blind spots in supervision within the Party,” said Yang Xiaodu, the deputy head of the Central Commission for Discipline Inspection (CCDI).

Inspection teams were also sent to the office of the State Council, China’s equivalent of a cabinet; the National People’s Congress, the regime’s rubber stamp legislature; and the Chinese People’s Political Consultative Conference, an advisory body to the legislature.

The CCDI already counts Zhou Yongkang, among its scalps. The former regime security czar was sentenced to life in prison last June.

During this round of inspections, critical Party departments like the Ministry of Foreign Affairs, Ministry of Public Security, Police Research Office of the Central Committee, and the Political and Legal Affairs Commission are expected to come under closer scrutiny for misconduct, according to Beijing News, a semi-official news outlet.

The CCDI already counts the former head of the Political and Legal Affairs Commission, Zhou Yongkang, among its scalps. The former regime security czar was sentenced to life in prison last June on charges of receiving bribes, abusing power, and leaking state secrets.

Under Zhou’s reign, the millions of security officials and agents under the Political and Legal Affairs Commission’s command frequently brutalized practitioners of the spiritual discipline Falun Gong, house Christians, ethnic minorities like Uyghurs and Tibetans, and Chinese dissidents. The domestic security apparatus had a budget higher than that of the People’s Liberation Army when Zhou, a key ally of Jiang Zemin, was at the helm.

Party officials who boast links with Jiang or actively partake in his pet project—the persecution of Falun Gong—have been methodically purged since Xi Jinping began his anti-corruption campaign three years ago.

This trend shows no sign of abating barely a week into the new year.

Jiang himself appears to have been singled out by Xi Jinping. In a new book of collected speeches released on Jan. 2, Xi accused some Party leaders of becoming a “Taishang Huang,” a Chinese allusion that references retired leaders who still play at godfather, holding significant sway over important political matters of the day. Analysts say this allusion pointed unmistakably at Jiang, who is well-known for having meddled in regime business since his official retirement as Party leader in 2002.