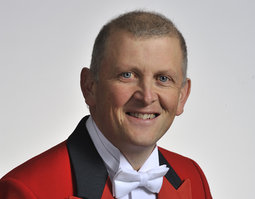 I was born in the seaside golfing town of Hoylake in 1966 a year before Roberto de Vicenzo beat Jack Nicklaus to win his only Major Championship.  He was a popular winner at the age of 44 and I’m told that I saw glimpses of his victory from my pram while being pushed along nearby Stanley Road!

Not from a golfing family I was introduced to the game by my maternal grandfather and through friends became a Junior member of Royal Liverpool in 1978.  I loved the game and was fortunate to become Junior Captain and then Colts Captain as my handicap dropped to a low of two (now four).

I managed to combine my academic background with my love of the game and developed a career in Agronomy.  I am currently Head of Agronomy for STRI who act as Official Agronomic consultants to The R&A Championship Committee and other sporting bodies.

Hoylake will always be my home, links golf my passion and Tom Watson my golfing hero.  I am incredibly proud to be selected as Captain in a momentous year for my club and I very much look forward to presenting the Claret Jug to one of golf’s great protagonists later this month.  Royal Liverpool has a celebrated history having been home to the first Amateur Championship in 1885, the first England vs. Scotland matches in 1902, and the first GB and Ireland vs. USA matches (the forerunner of the Walker Cup) in 1921.

Bernard Darwin, the famous golf writer once said “the links of Hoylake belongs primarily to the Royal Liverpool Golf Club, but it also belongs to the whole world of golf.”  It truly does and I and the members are proud to share our history and our fine links with our audience.

For many people in America the term “Captain” of a golf club may be unfamiliar. What role does the Captain play at Royal Liverpool?

The Captain of Royal Liverpool acts primarily in a PR capacity welcoming and hosting guests in his year of office.  As the oldest club in the NW of England, The Captain represents the club and speaks at a host of dinners and functions throughout the area during his year of office.  I am privileged to be able to present the Claret Jug to the winner of the Championship.

This is the 12th time Royal Liverpool will host The Open Championship. Amazingly, there was a gap of 39 years—between the 1967 and 2006 events. What caused that to happen?

The gap, which coincided with members of my generation growing up without an Open being staged, was caused by the growth of The Open, and the inability of the Hoylake site to grow with it.  New land became available in the late 1990’s and the dream of a return to the rota became reality.

What’s the greatest challenge in hosting The Open?

The club is well organized and with good planning, and the support of the R&A, who offer first class guidance, staging The Open is a challenge, but a manageable one.  The unpredictability of the weather is always the main challenge and can be a considerable one if it is wet.

Many people will not be at the facility but observing on television—what elements of the course should viewers take note when watching?

The links at Hoylake is a wonderful test of golf with fine views across the Dee Estuary to North Wales.  There are no hidden hazards or blind shots.  In many ways it is similar to the Old Course, with strategic planning from the tee critical to the avoidance of pernicious fairway bunkers.  Hoylake cannot be played from the rough, or from the fairway bunkers.  The winner will avoid both as Tiger did so well in 2006.

Royal Liverpool is second only to Royal North Devon as the oldest seaside course in England having opened in 1869—and has served as host to a wide range of events including the upcoming 2019 Walker Cup Matches and as the first venue in 1885 for the British Amateur—is it fair to say the club is underappreciated by many given the attention paid to others such as The Old Course at St. Andrews, Muirfield?

Hoylake suffered from not hosting an Open between 1967 and 2006, with many of the games top players and journalists not being exposed to its charms and challenges.  This was a shame and is probably a reason for under appreciation if it exists.  However it is gaining favor and with 2006 being a wonderfully successful championship on and off the links, everybody in the game is looking forward to coming back.

For the ’06 event—won by Tiger Woods who also became the first repeat winner since Tom Watson in 1983—there was little wind and the course played especially firm and fast. No question wind is ever unpredictable—how do you see the course playing this time around?

The weather in 2006 was exceptional both in the build-up to and during the championship.  This time the build-up has been wetter so the course is greener and the rough thicker.  However the aim will be to produce a firm running test of golf commensurate with the traditions of links golf.  A little wind would be appropriate—something we didn’t really experience in 2006, and something the members endure too much of!

Take a moment to describe the re-routing of the holes for this year’s event. The normal 1st hole has been moved to the 3rd position in the hole rotation to name just one change. What was the reason for this?

The routing for The Open is changed from the usual member routing.  The members 17th and 18th holes are played as the 1st and 2nd in the championship.  This means the members 1st hole—a daunting 426 yard dog leg right around the out of bounds cop is played as the 3rd in the championship.  This re-routing allows for the erection and placement of larger grandstands around the 18th green and means the round culminates with a risk and reward Par 5 which may yield anything from an eagle three to a triple bogey eight.

Be curious to know, given the vast impact of The Open economically, what is the projected impact financially for the overall Lancashire region?

The Open has a significant financial benefit to the Wirral area.  Estimates are it benefits the local economy by up to £70 -80 million pounds.

On a personal level how much golf are you able to play with all the duties leading up to The Open?

My golf has been surprisingly good given the intensity of duties. The clubs grandest medal is the Spring Meeting held on the first Saturday in May.  As Captain it is traditional for me to play with the Captain of The R&A, and then speak alongside him at the Spring Dinner in the evening.  With my focus on the speaking engagement in the evening I though little about the golf.  I became the first Captain in the history of the club to win the Spring Medal!

What was your reaction when you heard Tiger Woods would be coming back to Royal Liverpool as his first major championship as a competitor since his back surgery?

Personally I was delighted when I heard Tiger was coming back to Royal Liverpool.  His performance in 2006 is regarded by many who witnessed it as some of the best strategic planning and ball striking ever seen in the game. He is a fantastic champion and he can be assured of a warm welcome when he returns. Many will hope he can add to his list of major victories and move a step closer to Jack Nicklaus’ record.  I will be one of them.