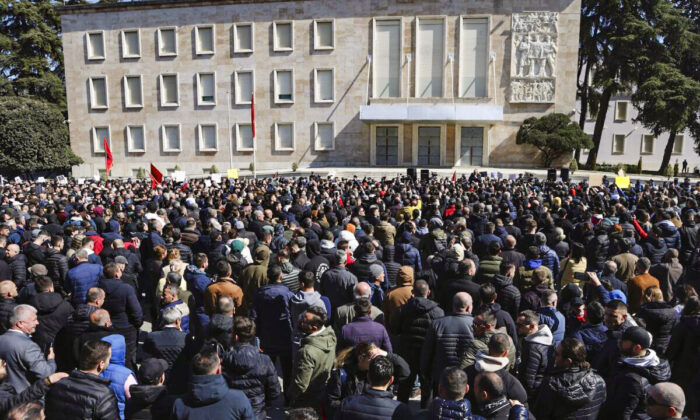 Protesters gather outside the prime minister's office during a rally in Tirana, Albania, on March 12, 2022. (Franc Zhurda/AP Photo)
Europe

TIRANA, Albania—Thousands of Albanians took to the streets of the capital Tirana Saturday to protest against sharp price increases on fuel and food that authorities blame on the war in Ukraine.

Albanians from across the country converged on the main Skanderbeg Square before marching in front of Prime Minister Edi Rama’s office with banners and chanting slogans.

In the fourth such protest this week, demonstrators again demanded that the government act to counter the prices increases.

Police were out in force to protect government buildings, but the protest ended peacefully. A small group of demonstrators marched to the police station to seek the release of dozens of people who were arrested in previous protests.

On Thursday, Rama’s government imposed price controls on fuel and urged Albanians to use their cars less following a 50 percent spike in gas prices. Under the measure, fuel suppliers will see their profit margins curtailed while retail prices will be set daily and gas stations that charge more will be shut down.

A body made up of government officials and business leaders made the initial decision to lower fuel prices for the next three days.

But protesters said they would continue to stage daily demonstrations because they say the government’s move to reduce fuel prices doesn’t go far enough.

Moments after the end of Saturday’s protest, Rama offered a cash handout to pensioners and vulnerable groups. He also pledged to cut income tax for more half of all private and government sector employees.

The government would continue to pay up to 80 percent of household and small business electricity bills, said Rama.

The fuel price hike has had a knock-on effect on food costs in the small Balkan country. Protesters accuse the government of profiting from the higher prices by not reducing taxation. They have urged it to emulate neighboring countries—which have also been hit by global price hikes due to Russia’s war against Ukraine—and cut fuel taxes to cushion the blow to consumers.