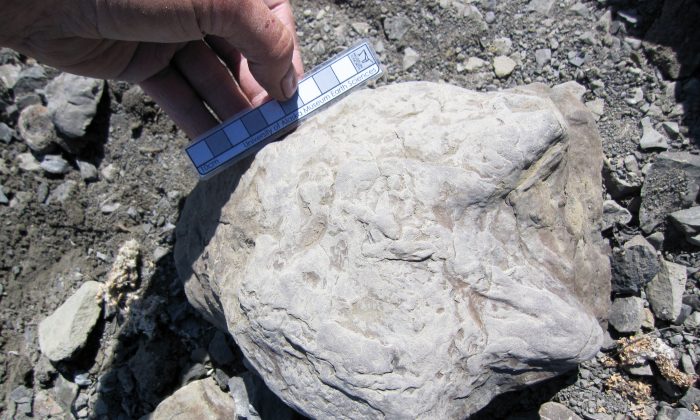 Hind foot print of an herbivorous dinosaur, one of thousands of dinosaur tracks found by researchers along the Yukon River. (Pat Druckenmiller/University of Alaska Museum of the North)
Science

In Alaska, thousands of dinosaur tracks were found along the Yukon River recently by researchers.

“There aren’t many places left in the world where paleontologists can just go out and find thousands of dinosaur footprints. This is the kind of discovery you would have expected in the Lower 48 [states] a hundred years ago,” said Pat Druckenmiller, University of Alaska Museum of the North earth sciences curator, in the announcement.

The footprints that were discovered come from a range of dinosaurs–big and small, and from both meat- and plant-eaters.

Researchers took off on a trip this summer that spanned 500 miles, traveling down the Tanana and Yukon Rivers.

The trip yielded “evidence of an extinct ecosystem we never knew existed,” according to Druckenmiller.

Paul McCarthy, Druckenmiller’s colleague from the Department of Geology and Geophysics at the University of Alaska Fairbanks, said they found dinosaur footprints “by the scores on literally every outcrop we stopped at.”

How did these footprints go undiscovered for so long? Druckenmiller says one potential answer is that they’re in “natural casts,” formed when sand filled in the actual footprint after the dinosaur stepped in mud.

“These are not negative impressions,” he said. “Rather they stick out from the rock and sometimes look like blobs with toes.”