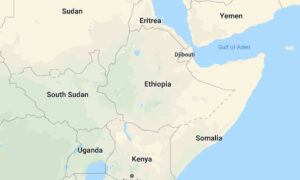 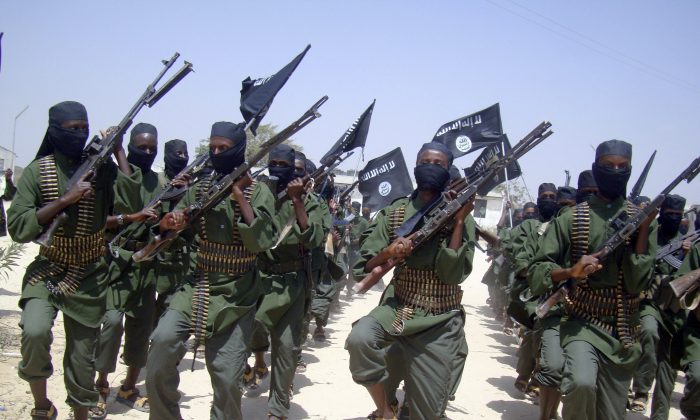 Al-Shabaab terroritst march with their weapons during military exercises on the outskirts of Mogadishu, Somalia, on Feb. 17, 2011. (AP Photo/Mohamed Sheikh Nor)
Africa

A U.S. service member was injured in Somalia on Monday morning by the terrorist group al-Shabaab, according to a statement from U.S. Africa Command (AFRICOM).

Air Force Col. Col Christopher Karns, a spokesman, said that the soldier is being treated for non-life-threatening injuries.

The attack occurred near Jana Cabdalle, Somalia, where U.S. forces were accompanying Somali troops on a mission, said Karns in a statement.

“The U.S. service member is in stable condition and receiving treatment for injuries that are not assessed to be life-threatening,” Karns said. “It is also assessed at least one Al Shabaab fighter was killed during the attack.”

“The U.S. regularly conducts advise and assist missions with Somali partner forces,” Karns continued. “The collective efforts of the U.S. and Somalia place pressure on al-Shabaab, limiting their ability to extend their reach and movement. Al Shabaab remains a dangerous enemy. Continued pressure is being placed on this al-Qaeda-affiliated threat to limit its ability to expand and export violence, terrorism, and crime more broadly.”

Karns told the Military Times that a U.S. service member was not killed in the attack. He said that is a false rumor concocted by al-Shabaab.

“There are several false reports claiming the death of a US soldier,” he told the Military Times. “False claims consistently continue to be part of al-Shabab’s playbook as they seek to weaponize information and employ traditional tools of the tradecraft of terror, to include truck, car, and roadside bombs. They are ambitious and look to expand their hate and violence in Somalia and beyond. ”

In January, a U.S. soldier and two Pentagon contractors were killed in an attack in Kenya.

Last month, AFRICOM said it killed six al-Shabaab terrorists in an airstrike in Somalia after the group attacked Somali forces.

“Al-Shabaab is a dangerous enemy,” said U.S. Marine Corps Maj. Gen. Bradford Gering at the time. “It is a danger to Africa and the United States. “We will continue to place pressure on the network and impact their ability to plan and execute these acts.”

So far, there have been more than 40 airstrikes carried out against al-Shabaab in 2020.

“We have placed considerable pressure on the network, and have permanently removed several of their key leaders,” Karns told the news outlet. “The U.S. presence and activity is helping to contain the threat and prevent its spread across borders. Al-Shabaab has clearly communicated its desire to strike America but does not have the capability to do so due to the pressure placed on them”