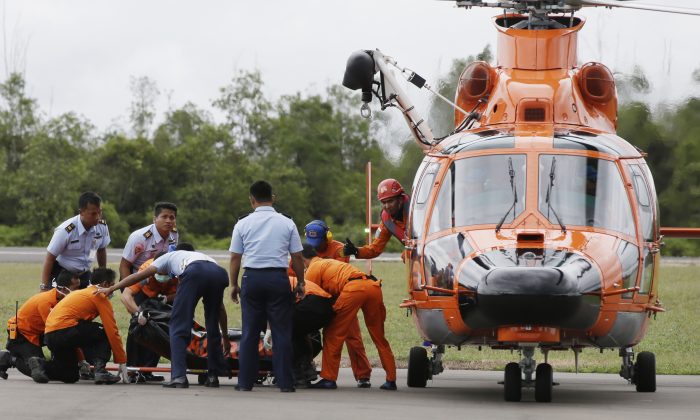 Officers of the National Search And Rescue Agency (BASARNAS) and Indonesian Air Force personnel unload a body of one of the victims on board AirAsia Flight 8501 from a helicopter at the airport in Pangkalan Bun, Indonesia, Wednesday, Dec. 31, 2014. The first proof of the jet's fate emerged Tuesday in an area not far from where it dropped off radar screens on Sunday morning. Searchers found bodies and debris that included a life jacket, an emergency exit door and a suitcase about 10 miles from the plane's last known coordinates. (AP Photo/Achmad Ibrahim)
Asia & Pacific

AirAsia Flight QZ-8501’s wreckage may have been found via sonar on the ocean floor off the coast of Borneo, reports on Wednesday said.

Search and rescue crews, however, won’t be able to do much for the remainder of the day due to bad weather.

The head of the search and rescue agency in Surabaya, Hernanto, told Reuters they believed that the plane was found in waters between 160 and 165 feet deep. AirAsia Chief Executive Tony Fernandes added that nothing has been confirmed.

The apparent wreckage was located on sonar near where bodies and debris were found. According to the news agency, the sonar image shows an upside down airplane.

So far, seven bodies have been recovered from the water, including that of a woman wearing a flight attendant’s uniform.

Meanwhile, Indonesian authorities have disputed rumors that officials discovered that a victim of the plane crash was still alive.

Conditions prevented divers from entering the choppy Java Sea, and helicopters were largely grounded. But 18 ships scoured the narrowed search area, and four of the seven corpses were recovered Wednesday before the search was called off for the day. Indonesia’s Meteorology and Geophysics Agency predicted conditions would worsen, with more intense rains, through Friday.

“It seems all the wreckage found has drifted more than 50 kilometers (30 miles) from yesterday’s location,” said Vice Air Marshal Sunarbowo Sandi, search and rescue coordinator in Pangkalan Bun on Borneo island, the closest town to the site. “We are expecting those bodies will end up on beaches.”

The airliner’s disappearance halfway through the two-hour flight triggered an international search involving dozens of planes, ships and helicopters from numerous countries. It is still unclear what brought the plane down.

Its last communication indicated the pilots were worried about bad weather. They sought permission to climb above threatening clouds but were denied because of heavy air traffic. Four minutes later, the jet disappeared from the radar without issuing a distress signal.