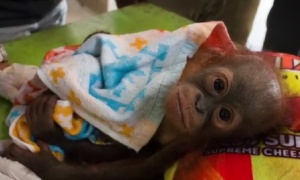 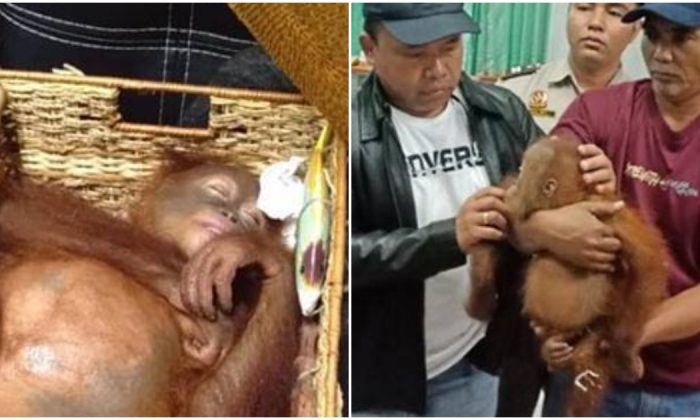 An orangutan found in a suitcase at Ngurah Rai Airport on March 22. (BKSDA)
International

Air Passenger Caught With Drugged Orangutan in His Suitcase

An airline passenger tried to smuggle an orangutan out of Indonesia in a suitcase, but was caught and arrested as he tried to board his flight.

Indonesian authorities said that they had stopped Russian Andrei Zhestkov, 27, as tried to get through security with a 2-year-old orangutan drugged on allergy tablets.

Zhestkov said that the orangutan had been bought in a street market in Java for $3,000, according to a statement by Bali conservation officials.

He had wanted to take it back as a pet.

The 2-year-old male sleeping orangutan was revealed at a pre-screening security X-Ray at Ngurah Rai Airport’s international departure terminal on the evening of March 22, according to officials.

“At first, we thought it was a monkey,” Dewa Delanata, head of the airport’s quarantine office told the Jakarta Post. ” The officers were afraid to open the basket, as they thought the monkey would be aggressive and run loose in the departure area.”

“When it was taken to the examination room and we opened it, we were shocked to find an orangutan,” he said.

The drowsy ape was inside a rattan case inside the suitcase.

According to authorities, Zhestkova had more antihistamine drugs in his suitcase, which he intended to administer on arrival in Korea before taking a further flight home to Russia.

Zhestkov could face a sentence of up to five years imprisonment and a fine of up to $7,000.

The endangered Sumatran orangutan is a protected species, protected under Indonesian law, which, according to the Tribune, states it is illegal  to “capture, injure, kill, store, possess, maintain, transport and trade or trade protected animals/animals or other parts in life or death.”

But orangutans face worse risks than being smuggled in a suitcase as potential pets.

As their jungle habitat shrinks across Indonesia, the great apes are increasingly pushed into contact with humans, and sometimes killed by farmers or landowners who say that they ruin their crops.

Earlier this month, a 30-year-old  orangutan was found severely injured on a farm in Sumatra, Indonesia, according to local reports, together with her month-old baby.

She was taken to an animal rescue center where X-rays revealed she had 74 air rifle bullets in her body and multiple fractures.

The infant had not suffered any injury but had been unable to breastfeed from his mother, and later died from malnutrition as his mother underwent a series of operations.

But his mother, named Hope, is now slowly on the mend.

The conservation center said it has treated more than 15 orangutans with a total of nearly 500 air gun pellets in their bodies over the last 10 years.

It is unclear exactly the reasons that Hope was shot. Last year four men were arrested over the killing of an orangutan shot some 130 times with an air rifle. They said it ruined their crops at a pineapple and palm oil plantation.

Orangutans are also at risk from poachers, with locals taking babies as pets, or selling or eating the older animals.