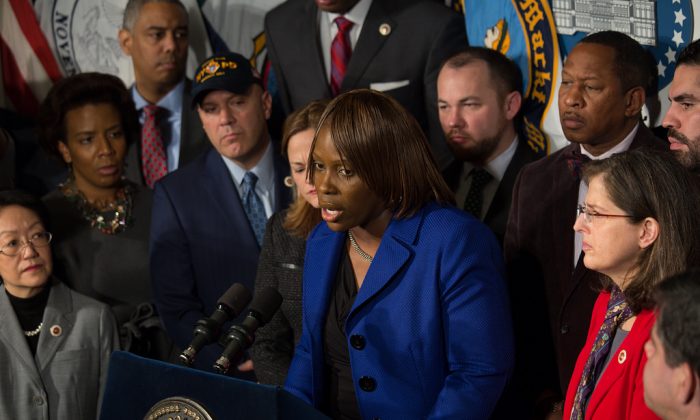 NEW YORK—Several city council members, including staunch supporters of police reform, advocated caution and consideration in reviewing police reform bills currently pending in the system. The shift in tone comes after the slayings of two police officers in late December.

Many in City Hall expressed condolences to the families of the two slain police officers and speedy recoveries for the two officers injured in a Bronx shooting Monday.

At the same time, council members said, police reforms were still high on the agenda.

After the tragedies, the City Council now has to return back to the dialogue about police use of force, said Bronx Council member Vanessa Gibson.

Several police reform bills are currently under committee review, giving council members a chance to air their opinions. Many of the bills were proposed in response to the grand jury decision not to indict a white police officer for placing Eric Garner, who was black, in a chokehold, which was a contributing factor in the latter’s death.

Gibson, who also serves as chair of the public safety committee, said after a Wednesday stated meeting that the bill that would require police to ask permission before searching suspects needed consideration.

“My greatest concern about it is the implementation of the bill,” she said, “I want to make sure that we strike a balance. I don’t want to do anything that would handcuff police officers and put them in great danger.”

She hasn’t taken a position on that bill or the one to ban the chokehold. But she does support legislation that would require officers to identify themselves to the public.

I definitely, personally may have some reservations about some of the bills.
— City Council Speaker Melissa Mark-Viverito

Despite her comments, Gibson is a co-sponsor of all three bills.

Some disagree that stances have shifted.

Police reform was “addressing a systemic injustice,” said King. “We’re at this place because of the injustice and violence of police against communities of color.”

He added that he didn’t condone the incident where two cops were shot and killed, “but it still doesn’t negate decades of mistrust or abuse on the part of some, not all.”

But even City Council Speaker Melissa Mark-Viverito, known for her progressive stances, revealed her hesitation over the bills.

Mark-Viverito told NY1’s Errol Louis on Tuesday during the “Inside City Hall” segment, “I definitely, personally may have some reservations about some of the bills,” she said, “Again I want to give my colleagues the ability to have that conversation.”

Another thing that has changed: only 20,000 uniform personnel will be retrained, including police officers, sergeants, and lieutenants, rather than the entire police force, according to Gibson. That figure doesn’t include the other 15,000; those in specialized units and staff at police academy.

Council members had been told before that the full police force would be retrained, and were surprised to learn otherwise.

The city council will be involved in further discussions about full training of the entire force, but it is one of many items that now seems harder to implement.