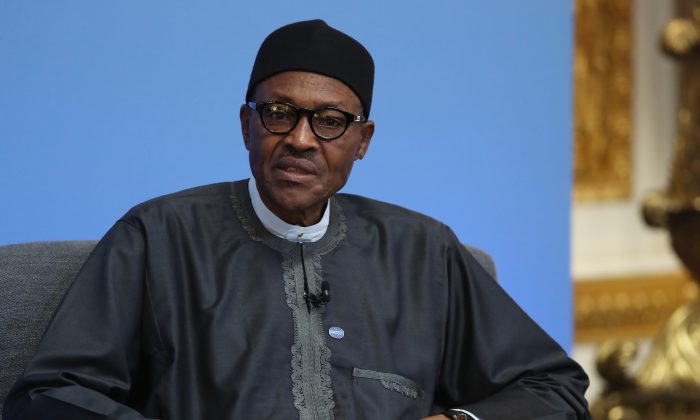 When news broke earlier this month that one of the Chibok schoolgirls abducted by Boko Haram in northern Nigeria had been freed, the Nigerian government offered it as evidence that their push into the militants’ stronghold was beginning to bear fruit. The rescue, however, comes against a backdrop of increased suicide bombings, condemnation of the government’s lackluster response to a second mass abduction of children in Damasak, and allegations that donor money earmarked for tackling Boko Haram has been siphoned off by President Muhammadu Buhari to fund a political witch-hunt against his rivals.

A year into Buhari’s term, these controversies have raised serious questions about the government’s claims to be living up to its campaign promises of defeating the terrorist group whilst eradicating corruption.

Amina Ali Nkeki, the rescued Chibok girl in question, was recovered in the Sambisa Forest in the northeast of the country with a young baby in her arms. She was accompanied by a man claiming to be the child’s father, two years after Islamist militants took her and 275 of her classmates from their school.

The plight of the Chibok girls garnered worldwide attention; during the Nigerian presidential elections, it became a stick for then-candidate Buhari to beat incumbent Goodluck Jonathan with as he accused him of lacking the resolve to take the fight to Boko Haram and find the missing girls.

It was on that platform, as well as a hard stance against corruption, that Buhari won the election. One year later, and thanks to a concerted effort with the Chadian army (along with U.S. support), the Nigerian government can indeed claim some success in retaking land from the ISIS-affiliated terror group.

It is their failure to find and release captives that now poses a security threat, as a spate of suicide attacks have rocked the city of Maiduguri and the surrounding area where Boko Haram once reigned. The fact that these attacks are often carried out by young girls would suggest that this is the ghastly use the fighters have found for their abductees.

According to a recent Human Rights Watch report, their arsenal of potential suicide bombers may be much larger than previously thought. Following a 2014 attack and massacre at Damasak, near the border with Niger, some 400 women and children were abducted. While the previous government, already under scrutiny over its handling of the Chibok abduction, stood accused of trying to cover up the affair entirely, Human Rights Watch has questioned whether Buhari’s administration “has made any serious effort to secure their release.”

By far the most damning report to come out about Buhari’s government charges him with undermining the two pillars on which his presidential campaign rested: the fight against Boko Haram and the eradication of corruption. By drawing resources away from one, Nigeria’s president has engaged in a spurious crackdown on the other.

Concerns have been raised that hundreds of millions of pounds donated to the Nigerian government to combat Boko Haram have been redirected to fund a witch-hunt against Buhari’s political opponents.

According to the Daily Telegraph, citing unnamed “British officials,” concerns have been raised that hundreds of millions of pounds donated to the Nigerian government to combat Boko Haram have been redirected to fund a witch-hunt against Buhari’s political opponents. It is alleged that some of the 860 million pounds ($1.26 billion) in aid pledged by the U.K. has ended up at the disposal of the Economic and Financial Crime Commission (EFCC), set up to tackle the country’s rampant political corruption. However, the EFCC has been accused of being selective and targeting only members of the opposition party.

Indeed, of the 70 arrests made this year as part of the government’s anti-graft measures, most have involved members of the former ruling PDP (including the party spokesperson).

The High Court of Abuja and the Body of Senior Advocates of Nigeria have both had harsh words for the EFCC, warning that if the Commission is reduced to a political tool in the hands of the sitting government, Nigeria risks sliding back toward its authoritarian past where arbitrary arrest and political persecution were the norm.

If the accusations are borne out, it will come as a double blow to the people of Nigeria. Voters last year were so fed up with crippling financial malfeasance that they were willing to bet on a man whose last term in government, at the head of a military coup, was infamous for its human rights abuses and strict, army-imposed discipline.

After 16 years of democracy, but little improvement in the quality of life for the average Nigerian who still faces daily electricity blackouts, fuel shortages, and mass unemployment, many concluded that the only remedy for the country’s woes was to bring back Buhari, in the hope that he could whip the country into shape once and for all.

Buhari was not elected for his economic program; he was elected to fight the scourge of terrorism laying waste to the north and to root out corruption. Now, as Nigeria’s oil-dependent economy tanks due to low crude prices, the public is coming to realize that the state’s dwindling resources are not being used toward either of the ends that Buhari promised. This is sure to deepen the cynicism of the Nigerian electorate.