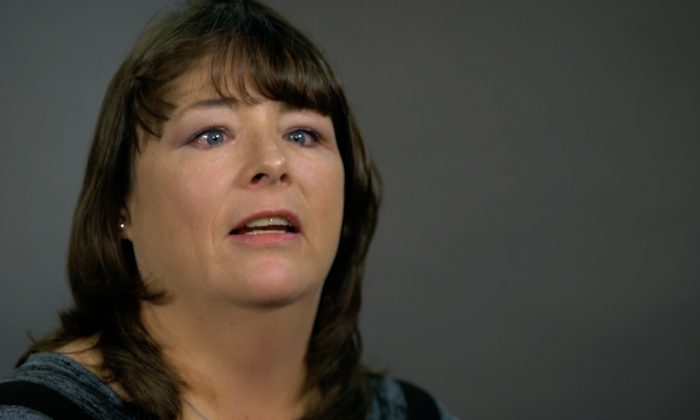 In November 2015, Dana Bowerman was one of roughly 6,100 federal inmates released early from prison because of a change to sentencing guidelines for drug crimes. (The Daily Signal)
Opinion

Freedom is pizza, and swimming, but it can also be frustrating, confusing, and not so limitless.

“Freedom for me was a little disconcerting because it’s not easy to shed the inmate mentality,” said Dana Bowerman, 45, a recently released federal prisoner. “I felt other, different, less than. I sometimes catch myself thinking, I shouldn’t be here, I shouldn’t be talking to him. I am doing something wrong because I am out here with free people. It was hard at first to shed that.”

Bowerman has certainly enjoyed perks of freedom—on her first day of her own control in 15 years, she ate pizza for breakfast, and she’s taking swimming lessons in preparation for summer at her mother’s house on the lake, the same place she grew up with dreams of being a veterinarian for racehorses, before an addiction to drugs unraveled her life.

She’s also realized the limitations of freedom for someone who’s lived without it for so long—Bowerman is working part-time at a supermarket, but she’s been shut out of a better job that can pay the bills because of her status as a convicted felon.

And as a beneficiary of a policy change that let her out of prison early, freedom has Bowerman feeling something else entirely: guilty.

Because, as a movement to reconsider tough-on-crime laws that were passed during the “War on Drugs” continues to advance, there will be lucky ones like Bowerman, but also others left behind.

“People are wrong to think everyone in prison deserves to stay there, because eventually they are going to get out,” Bowerman told The Daily Signal in an interview. “I’ve met some of the best people I’ll ever know in prison. And I left a lot of people behind who don’t deserve to be there. They are no threat. All they want is to go out and see their grandkids be born or spend time with their kids. Not everyone is bad. They just need a second chance.”

In November 2015, Bowerman was one of roughly 6,100 federal inmates released early from prison because of a change to sentencing guidelines for drug crimes.

The year before, the U.S. Sentencing Commission, an independent agency that establishes guidelines for federal crimes, reduced the suggested prison terms for people convicted of drug trafficking crimes and said those guidelines could be applied retroactively for offenders already serving long prison terms.

To earn relief under the new guidelines, eligible current prisoners could ask federal judges to take another look at the case and have their sentences shortened if they are determined to have behaved well in prison, and are unlikely to reoffend.

Almost half of the nearly 200,000 inmates incarcerated in federal prisons are serving time for drug offenses.

Many of those were punished under mandatory minimum sentencing laws, passed by Congress in the 1980s and 1990s, which require binding prison terms of a particular length and prevent judges from using their discretion to apply punishment.

Recognizing that these laws may have gone too far, and responding to surging prison costs and incarceration rates, both chambers of Congress are considering legislation to reduce the terms of certain mandatory minimum penalties.

In addition, a total of more than 40,000 inmates are expected to be released over time through the retroactive change in the U.S. Sentencing Commission’s guidelines.

Most of the prisoners benefiting from these actions are considered low-level, nonviolent drug offenders, including many like Bowerman who were punished severely for a first-time offense.

Bowerman, who grew up as an honor student and cheerleader in Lubbock, Texas, and maintained a stable career, eventually let her drug use overwhelm the good in her world.

By the time of her arrest in May 2000 for her role in selling drugs in a methamphetamine ring, Bowerman had been addicted to the drug for 15 years.

The Drug Enforcement Agency (DEA) alleged that Bowerman delivered money, acted as a courier, and occasionally sold meth to others.

Bowerman says her involvement in the criminal ring was driven by her addiction to drugs, and that her role in the conspiracy was elevated by co-defendants who testified against her.

At 30 years old, Bowerman was sentenced to 19 years and seven months in prison—until 2018—a longer punishment than 14 of her 15 co-defendants. Only her father received a longer prison sentence, and he remains incarcerated.

“As soon as I walked in the [prison] door, I started thinking about what if the laws changed,” Bowerman, who was sent into prison still addicted to drugs, said. “That was my mentality. I had to keep hope that something would change and I wouldn’t have to do the entire 19-year, seven-month sentence I was given.”

Bowerman got sober in prison, mostly on her own. She said she had to wait 10 years to get into a drug treatment class in prison.

She also raised guide dogs for the disabled and mentored at-risk youth.

Now that she’s been free for five months, Bowerman hopes to continue mentoring drug users and wants to work in health care. She vows to “never go back to prison.”

Yet despite what’s ahead of her, Bowerman can’t stop looking back.