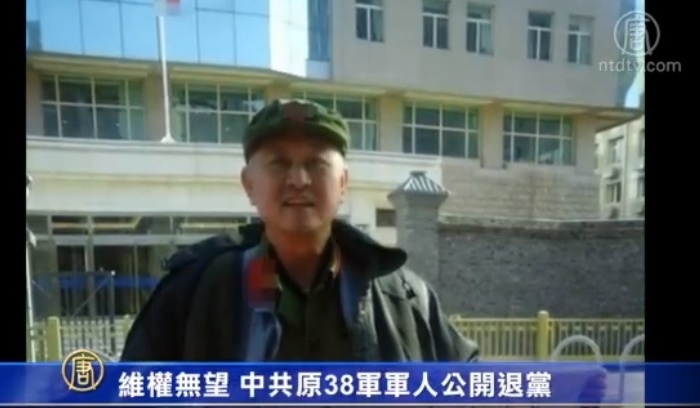 Gao Hongyi, a Chinese army veteran, was arrested and held for five days after his public renunciation of the Chinese Communist Party. Gao has fought a fruitless personal battle against local corruption for over ten years since he was, illegally he said, laid off. (Screenshot/NTD Television)
China

After 10-Year Battle Against Corruption, Chinese Veteran Quits the Party

In his youth, he protected his homeland as a soldier in China’s military. Now, illegally laid off from his work, he has no home, and begs for food on the streets of Beijing with a sign explaining his misery.

On Dec. 4, People’s Liberation Army (PLA) veteran and unemployed worker Gao Hongyi decided he had had enough of communism. In a demonstration before the office of the Ministry of Supervision in Beijing, he unfurled a banner declaring his intent to withdraw from the Chinese Communist Party.

“I am going to quit the Communist Party,” Gao Hongyi said in a Nov. 15 interview with NTD Television. “I am quitting the Party to oppose the corrupt officials of Qingdao.”

Gao served in the PLA’s 38th Army from 1972 to 1977. Upon demobilization, he returned to a work unit in his hometown of Qingdao, Shandong Province, but was laid off in 2001 when his employers found his position could be covered better by cheap labor.

Though Gao filed a lawsuit and won, the terms of the verdict were never carried out. Having neither income nor social welfare brought the veteran to Beijing to beg for food and petition the authorities. He has been there for over ten years, withstanding verbal threats of imprisonment and death by security personnel. His family has since fallen apart after he lost the ability to make ends meet.

“The fact is that I’m a veteran without anything to eat,” Gao said. “Does it make any sense for the government to treat me like this? I truly feel wronged. I won a lawsuit, but I still have no pension, and I have never received any pension. I can’t retire. All I can do is demand they fulfill their legal responsibility.”

The Ministry of Supervision, before which Gao and other petitioners stage their demonstrations, is a Chinese government body intended to ensure clean government and prevent corruption.

Gao, who was with a group of about a hundred petitioners on the day he renounced the CCP, was quickly detained by authorities and charged with “disturbing public order.” He spent five days in jail. Released on Dec. 9, he went back to the Ministry of Supervision to denounce the Party the next day.

“Those who fear death are not acceptable for the 38th Army,” said Gao, recalling his military past. “On the first day they ordered us to not fear death.”

“I didn’t die,” Gao said, “and the country won’t help me, despite their beautiful words. Now I truly have no fear of death. Here in Beijing, I am like a dog without a master.”

Security personnel again restrained and detained Gao after his second round of calls to quit the Communist Party.