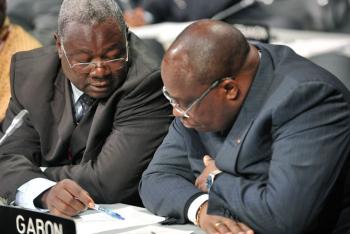 Delegation members of Gabon, Africa, talk prior a meeting at the climate summit in Copenhagen on Dec. 14. The meeting was adjourned for several hours after a walkout protest led by African countries objecting to developed countries' intention to create (Attila Kisbenedek/AFP/Getty Images)
International

Members of the G77 bloc walked out of negotiations, declaring that they will continue only if the West guarantees to accept the new version of the Kyoto Protocol.

The halt came just four days before the world’s leaders are expected to finalize an agreement between 192 countries on how to fight climatic changes, considered by many scientists and activists as a threat to the human race's survival on Earth.

“The Kyoto protocol is of paramount importance to us,” said Mama Konate, chief delegate for the African nation of Mali, in the Financial Times.

The low-income countries promoted the idea that developed nations should commit to emissions cuts beyond 2012—after the Kyoto Protocol expires.

However, Western nations prefer an entirely new agreement to replace Kyoto, which will also legally bind developing countries like China to an emission cuts target.

The G77 bloc accused the hosting country of bias and undemocratic processes. "It has become clear that the Danish presidency—in the most undemocratic fashion—is advancing the interests of the developed countries at the expense of the balance of obligations between developed and developing countries," Sudanese diplomat Lumumba Di-Aping told the BBC.

The African countries returned to the talks in the afternoon, following the discussion with Connie Hedegaard, Danish minister for the U.N. Climate Change Conference and president of the talks, after she addressed their main demand of separate talks on the Kyoto Protocol.

According to scientists, the continent of Africa is most vulnerable to climatic changes, already facing burning temperatures and altered rain cycles. At the same time, Africa lacks the resources to fight climate changes itself.

Experts on the climate change conference have to solve a lot of difficulties, the biggest of which is overseeing the negotiation of global financial and emissions cuts limits, which will be legally binding for all countries.

More than 100 world leaders will attend the closing session on Friday. Some analysts said that it’s not clear whether an agreement will be reached by then.