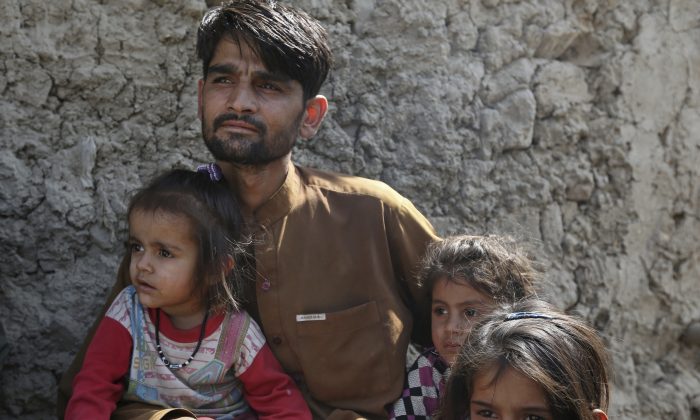 In this file photo, a displaced Afghan man with his children watch an acrobatic display during a juggling competition in Kabul, Afghanistan. (AP Photo/Rahmat Gul)
International

KABUL, Afghanistan—Children of Afghan families returning from Pakistan who don’t go to school and have no access to education are increasingly at risk of early marriage and child labor, according to a survey released on Wednesday.

The survey by Save the Children reveals an alarming crisis in Afghanistan’s eastern Nangarhar province where the polling took place among returnees from Pakistan. It warns the situation could deteriorate further as more than 3,500 Afghans return from Pakistan on a daily basis after Islamabad tightened regulations on those living illegally in the country.

So far this year, more than 650,000 Afghans have returned from Pakistan, with the majority planning to stay in Nangarhar, at least until the end of winter. Hundreds of thousands more Afghans are expected to be repatriated in the coming months.

The survey is based on 379 interviewees conducted by Save the Children between Oct. 28 and Nov. 8 in five districts in Nangarhar. The poll gave a 5 percent margin of error.

Among the returnees, many have no money and lack any sort of documents or ID papers. Parents facing poverty often feel the only stable choice they can make is to arrange a marriage for their child or to bring the children into the workforce, the survey found.

“We are really concerned about the risks that are threatening the children and the future of the children if the situation continues,” said Bahirullah Wyaar, an adviser at Save the Children in Kabul. “If the children, especially the girls, do not have access to education, it puts them at the risk of early marriages.”

Also, many of the poorest of the poor have no resources, which may “force the children to work on the streets,” Wyaar added.

In June, Pakistan’s government extended a deadline for Afghan refugees deemed to be staying in Pakistan illegally to return home by the end of the year or face deportation.

But although Kabul welcomed the extension, Afghanistan’s refugees and repatriation minister, Sayed Hossain Alemi Balki, said he wanted it extended until December 2017. He also said Pakistani police were harassing refugees, and said Islamabad should not forcibly repatriate Afghan refugees when the new deadline expires.

Millions of Afghans fled their country to neighboring Pakistan and Iran during the 1979-1989 Soviet occupation of Afghanistan, the brutal civil war of 1992-1996 between U.S.-backed rebel groups that fought the Soviets and again after the Taliban came to power in 1996—creating one of the world’s largest refugee populations. Both Pakistan and Iran have been pressing for them to leave.

Pakistani authorities have also said that a number of militants are hiding in refugee camps, creating a security risk for the country.

In the Save the Children survey, Ana Locsin, the group’s director in Afghanistan, is quoted as saying that “part of the problem is that many repatriated families left stable jobs and lives in Pakistan and are now watching the few savings they have dwindle away knowing they have little prospect of income.”

“Many are living out in the open, or in tents, so they have no real semblance of shelter, let alone security,” she added. “They often feel they have little choice but to send their child to find work or to marry off their daughters.”