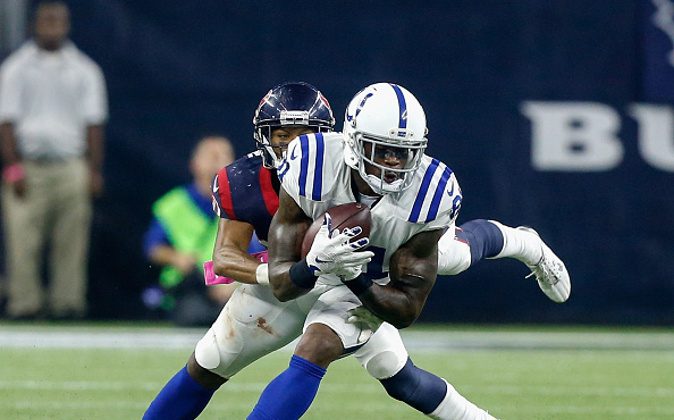 HOUSTON, TX - OCTOBER 08: Andre Johnson #81 of the Indianapolis Colts tackled by Kevin Johnson #30 of the Houston Texans after a reception in the second half at NRG Stadium on October 8, 2015 in Houston, Texas. (Photo by Bob Levey/Getty Images)
NFL

Featuring the 6-7 Colts, 6-7 Texans, 5-8 Jaguars, and the 3-10 Titans, the AFC South is the weakest division in the league. But by virtue of being weak, the NFL division format gives whichever team wins the division a special opportunity to enter the playoffs. Unlike the NFC East, another weak, competitive division, the playoff implications for the AFC South are fairly straightforward.

With the Titans now out of contention, below is an outline of what it will take for the Texans, Colts, or Jaguars to win the division crown (omitting ties since they are so rare).

To determine who wins the AFC South, Week 15’s Texans-Colt bout is critical. Whichever team wins that match will win the division if and only if the following does not happen.

Meanwhile the Jaguars take the division if and only if they win Weeks 15, 16, and 17. If this prerequisite is met, then the following must also occur:

Note that the Jaguars play the Texans in Week 17, so the Texans losing and Jaguars winning can be accomplished in one shot there. Therefore, if Jaguars fans had to pick a side, they should root for a Texans victory.

Texans vs Colts Round 2

It was Matt Hasselback versus Brian Hoyer when the Colts defeated the Texans 27—20 in Week 5. This time around, we may get a TJ Yates—Charlie Whitehurst matchup if Hasselback (ribs) can’t play. But no matter which quarterback takes the field, the quarterback position is certainly not ideal for either team.

For the Texans, Yates is the third quarterback in the Mallett-Hoyer-Yates carousel. As such, the quarterback position is definitely one that the Texans will look to address in the upcoming draft.

For the Colts, veteran Matt Hasselback has really filled in admirably for Andrew Luck given expectations. In Hasselback’s first four starts, he pulled out victories in all four games with a combined passer rating of 94.4. Lately however, the veteran’s legs seem to have finally caught up to him. In Weeks 13 and 14, Hasselback combined for 0 touchdowns, 2 interceptions, and a passer rating of 69.1. Granted, he wasn’t atrocious. But with the wear and tear of the game continuing to pile onto the 40-year-old’s body, he has looked more and more dismal.

Hasselback’s game is not the only aspect that has regressed for the Colts. In the past two weeks, the Colts defense has also left much to be desired, giving up 45 points to Pittsburgh in Week 13, and then a staggering 51 to the division rivals Jaguars in Week 14.

Last week’s implosion to the Jaguars was the culmination of a frustrating season for the Colts. A team with Super Bowl aspirations coming into the season, the Colts have been mired by both horribly ineffective play from franchise quarterback Andrew Luck, and the sober realization that their defense is simply inadequate to compete with the AFC’s elite. On the other hand, though the Texans aren’t exactly trending up, at least they aren’t crippled by damaged moral.

Related Coverage
A Visual Look at the Race for the NFL Sack, Receiving Yards Leaders

With that said, both teams do have the same record, though on paper the Texans are on top in just about every major category, whether it’s total defense, total offense, points per game, turnover differential, etc.

Another interesting fact is that Sunday’s game is in Indianapolis, where the Texans have never won. While there is no special reason that leads us to believe this year’s Texans team will buck the trend, we can make an objective analysis.

In regards to offense, as per the quarterback discussion above, both teams have strikingly similar offensive situations. Both offenses are characterized by ineffective quarterback play, inconsistent line play, and at least one elite playmaking wide receiver—Ty Hilton for the Colts and Deandre Hopkins for the Texans. So in terms of generating offense, I would call it a wash between the two units.

The one area where the Texans do have a clear advantage over the Colts is on defense. A big reason why the Colts won in Week 5 is that their offense clicked on all cylinders. They established the run, ran away from JJ Watt, frustrated Watt on passing downs, and set up an efficient gameplan for Matt Hasselback, with Hasselback’s quick 2.12 sec. average release time further nullifying Watt. So we see that the Colts offense outdueled the Texans defense in Week 5 through executing a well thought-out gameplan.

In some sense then, we could say the Texans defense has the edge this time around, as they get to adjust to the Colts’ game plan.

At the end of the day, the Texans offense will get some points, so the Texans’ chances of victory depend on their defense’s ability to contain the run, eliminate big plays, and generate pressure on Hasselback/Whiteburst—a task that will certainly rest on the shoulders of Watt, thereby holding the Colts offense to less points than the Texans offense scores. Through predicting the likelihood of this, I concur with the popular spread of -2 for the Texans.