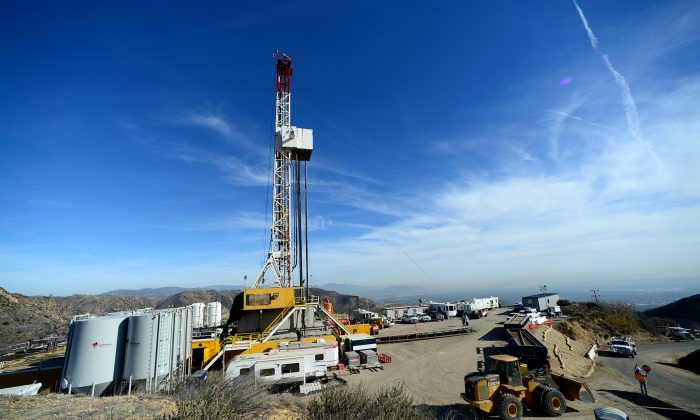 Crews from SoCalGas and outside experts work on a relief well at the Aliso Canyon facility above the Porter Ranch area of Los Angeles, Wednesday, Dec. 9. 2015. (Dean Musgrove/Los Angeles Daily News via AP, Pool)
News & Commentary

A recent aerial video of Aliso Canyon in California shows the stunning effect of a methane gas leak.

The natural gas leak has been spewing out 110,000 pounds of gas every hour for more than two months.

The leak started on October 23, when the casing of a gas storage well failed. The cause is still unknown.

Numerous evacuations have taken place, including the shift of two schools to another area. Thousands of people have been displaced,  reported the Associated Press.

The location of the underground pipe that’s leaking was finally pinpointed, Fox News reported on Tuesday. They’re working on drilling a relief well nearby that they’ll then connect to the leaking well so they can plug it with cement.

“One of the challenges in drilling this relief well is to find a 7-inch pipe from about 1,500 feet away, several thousands of feet below ground – while avoiding others nearby,” Southern California Gas Co. said in a statement.

The Environmental Defense Fund, which released the aerial footage, noted that the leak is one of the biggest in history.

“It’s one of the biggest leaks we’ve ever seen reported,” Tim O’Connor, the California climate director for the Environment Defense Fund, told The Washington Post.

“It is coming out with force, in incredible volumes. And it is absolutely uncontained.”