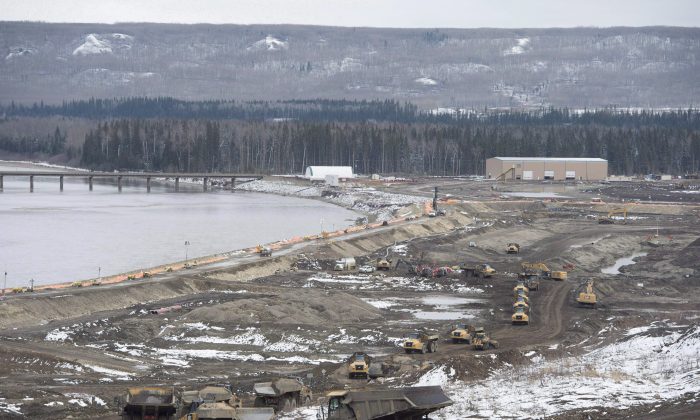 The Site C Dam location is seen along the Peace River in Fort St. John, B.C., on April 18, 2017. A partnership led by Aecon Group Inc. has been chosen as the preferred proponent by B.C. Hydro for a Site C generating station and spillways civil works contract. (The Canadian Press/Jonathan Hayward)
By Rahul Vaidyanath

Half a year into the federal government’s review of the takeover of Aecon by a Chinese state-owned construction firm, the implications for business and the global world order loom larger than ever.

Canada is desperate to attract foreign capital to revitalize its infrastructure, and the Liberal government wants to do more business with China, including potentially a free trade agreement. But the Canadian situation should differ from a number of less developed countries that can’t say no to Beijing’s deep pockets for infrastructure support. And this requires the right policy that provides clarity to business and defines Canada’s relationship with China.

Around the world, advanced democracies are grappling with the side effects of increasing Chinese foreign investment in their jurisdictions. The Chinese communist regime wants to displace the United States as the world’s foremost superpower and it’s laying groundwork to do so, for example through its Belt and Road Initiative (BRI).

The European Union (EU), being a diverse group of nations of ranging economic strengths, is becoming less cohesive due to China’s influence. The “16+1” network between China and 11 EU member states and five Balkan countries are making it difficult for a consistent EU policy on Chinese investment, which is a tool to increase Beijing’s influence abroad.

The Mercator Institute for China Studies, in its report “Authoritarian advance: Responding to China’s growing political influence in Europe,” says Europe must be able to stop state-owned takeovers of companies that are of significant public interest.

“The EU also needs to implement measures to align BRI investments in its neighbourhood with European interests,” according to the report.

The lack of EU cohesion goes beyond economic considerations to political influence, as discussed by Dr. Mohan Malik in the Macdonald-Laurier Institute’s “Straight Talk.”

“The European Union faces a big challenge from the 16-plus-one grouping that China has formed, with countries like Serbia, Greece, Hungary, the Czech Republic, Macedonia. All these countries have undermined EU efforts to sanction or criticize China’s human rights record in the U.N.,” said Malik.

Countries are taking matters into their own hands. German economy minister Peter Altmaier is looking to lower the threshold percentage at which the German government can intervene in potential Chinese stakes in German firms.

Under the leadership of Donald Trump, the United States has taken the toughest stance among advanced economies against Chinese acquisitions and is poised to give more power to the Committee on Foreign Investment in the United States (CFIUS).

According to research consultancy the Rhodium Group, Chinese investment in the United States increased over 800 percent from 2011 to 2016; however, recent notable deals that didn’t go through due to the presence of CFIUS include Tsinghua Holdings’ attempt to purchase Micron Technologies and Broadcom’s offer to purchase Qualcomm.

Aecon CEO John Beck said he’s not at all frustrated by the length of the government’s review and is confident the investment review will be completed by the end of June.

“We are not going to be representatives of a foreign government. We just aren’t,” said Beck in an interview with BNN. He remains adamant Aecon will be run by Canadian management.

Beck is trying to deliver the best return to his shareholders. It’s not up to him to formulate national public policy.

Former CSIS director Ward Elcock notes that the Chinese communist regime doesn’t share the same values and principles as Canadians and has very different ideals; Canada is largely governed by rule of law, whereas China isn’t. Accordingly, he doesn’t think it’s appropriate for a Chinese state-owned enterprise (SOE) to be managing critical infrastructure in Canada.

“Some may want us to believe that those companies will have Canada’s interests at heart, but it’s hard to imagine that a state-owned enterprise in China owning a company in Canada has any interest but advancing the interests of China,” he said in an interview with BNN.

Duanjie Chen, a Macdonald-Laurier Institute senior fellow who has written extensively on Chinese foreign investment, said at the think tank’s April 25 event “Dragon With a Chequebook” that democratic countries have to stick together to contain the Chinese global order.

Aecon, involved in the building of Canadian landmarks like the CN Tower and the St. Lawrence Seaway, being taken over by a Chinese SOE is not a run-of-the-mill acquisition.

“Philosophically I’m predisposed against the public sector participating in the free market whether it’s a Chinese state-owned enterprise or a Canadian Crown corporation,” said John Gamble, president and CEO of the Association of Consulting Engineering Companies, in a phone interview. “I don’t believe government should be competing against the private sector.”

Aside from opposing philosophies between Canada and China, the potential acquirer CCCC also has a dubious record including fraud, corruption, weak labour standards, and an abject safety record.

Chinese SOE Woes in Australia a Warning for Canada

The bottom line for Gamble from a business perspective is that the government has to come up with sound policy that will guide business decisions in the future and help CEOs like Beck.

“We’re dealing with jurisdictions that have very different business cultures and philosophies about the role of the state in the economy, so I think government needs to get ahead of this … so that shareholders and owners of companies that are looking to sell their companies can make informed business decisions in the future,” Gamble said.

Overwhelming evidence suggests the Canadian government should not approve the takeover of Aecon by CCCC due to national security concerns. Dealing with any backlash from China is a smaller price to pay than having a communist regime-backed company competing against private firms to further its own objectives.