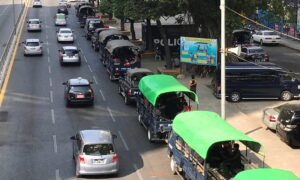 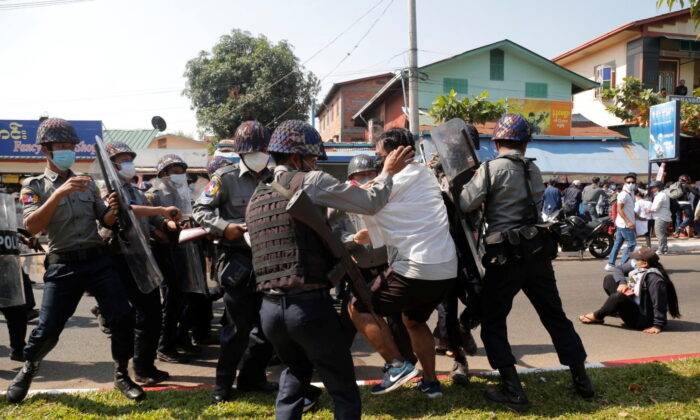 A demonstrator is detained by police officers during a protest against the military coup in Mawlamyine, Burma, on Feb. 12, 2021. (Than Lwin Times/Handout via Reuters)
Asia & Pacific

An advocacy group has recently accused Chinese state-owned companies of being the biggest arms supplier to the Burmese military. Meanwhile, thousands of Burmese citizens have recently protested against the coup and believe Beijing was behind it, despite the Chinese embassy repeatedly denying the claim.

More than a dozen other suppliers were funded from China or Hong Kong. A spokesperson from Justice For Myanmar said weapons supplied by NORINCO to the Tatmadaw (the official name of Burma’s armed forces) were being used on unarmed civilians amid mass protests following the military coup on Jan. 31, according to the RFA report.

The army said it carried out the coup because of alleged electoral fraud during the federal elections in November last year. Aung San Suu Kyi’s political party, National League for Democracy, had won by a landslide. The military placed Burmese army chief Min Aung Hlaing, 64, in charge of the country.

Zhang Shengqi, chairman of the Myanmar-Burma Assistance Association, told RFA that it is an open secret that Chinese companies have been selling weapons to Burma’s military for a long time.

Zhang said, “Ten years ago, the Chinese government moved its security defense line south from Yunnan Province and into northern Myanmar. … It sees the whole of Myanmar as a security zone.”

He believes that the Chinese regime is not willing to see that “Myanmar had gotten closer to the U.S. [under a democratically-elected government],” according to RFA.

Though Beijing hasn’t explicitly shown its support to the military coup, the Burmese people believe the Chinese communist regime is behind it and even directly involved.

Thousands of protesters gathered outside the Chinese embassy in Burma’s biggest city of Yangon on Feb. 17, holding up banners and posters accusing Beijing and mocking Chinese leader Xi Jinping, according to Western media outlets. One Reuters photo showed a group of protesters holding up posters of Xi being depicted as a puppet master and manipulating army chief Min Aung Hlaing. The words on the posters read, “Please stop helping the military!”

Since the coup, the Burmese people’s dissatisfaction with the Chinese regime has deepened, according to Chinese media outlets. Internet rumors began circulating on social media about China helping the military, such as allegations that Chinese aircraft have been transporting technicians to Burma, China has helped Burma build an internet firewall, and Chinese soldiers have appeared on the streets of Burma.

On Feb. 10, the Chinese Embassy in Burma issued a statement on Facebook, stating that the many planes that China flew to Burma recently did not carry technical personnel, but carried import and export goods such as seafood. However, the Burmese people were not convinced and the statement became a target of mockery. Some have interpreted the “seafood” as an acronym for “Software Engineering Approach for Offshore and Outsourced Development,” RFA reported.

On Feb. 15, the Chinese ambassador to Burma officially had to deny these claims again in an interview with Burma’s national media.