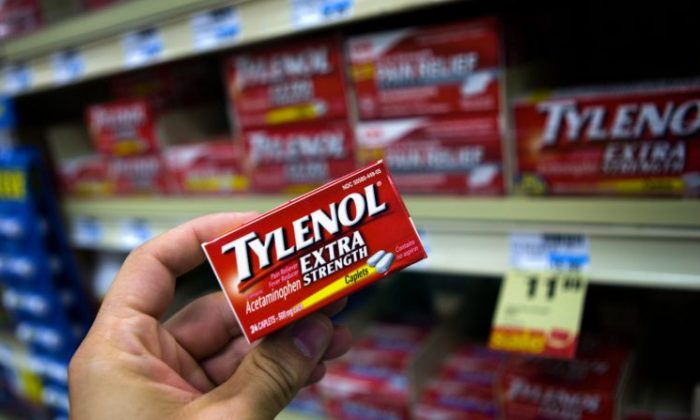 Extra Strength Tylenol is displayed in a drugstore in Washington, DC on July 5, 2006. (Brendan Smialowski/Getty Images)
US News

Popular over-the-counter painkillers which contain ibuprofen and acetaminophen can block emotion and interfere with thoughts, according to an “alarming” review of existing research by scientists from the University of California, Santa Barbara.

The UC scientists reviewed existing research and found that these painkillers can affect how people process information, respond to emotionally evocative images, and experience painful emotions. As a result, people who take ibuprofen or acetaminophen may be less sensitive in emotional scenarios, including being excluded from a game or reading about a stranger’s painful ordeal.

“In many ways, the reviewed findings are alarming,” Dr. Kyle Ratner, the co-author of the study, told Daily Mail. “Consumers assume that when they take an over-the-counter pain medication, it will relieve their physical symptoms, but they do not anticipate broader psychological effects.”

Ratner’s study found that women who took ibuprofen reported fewer feelings of hurt in experiences, including being excluded from a game or writing about a time when they were betrayed. Men reported the opposite effect.

The study also found that people who took acetaminophen had a duller emotional response to pleasant and unpleasant photographs than those in the control group who took a placebo.

Ratner’s review also showed that people who took painkillers had less discomfort letting go of possessions. Test subjects who took acetaminophen set a lower price when asked to sell their possessions than those in the control group.

Previous studies have also shown that painkillers affect how people process information. Acetaminophen was shown to increase the number of mistakes when people were asked to perform or not to perform a task.

The UC researchers pointed out that further research is necessary before changing public health policies.

The study was published in Policy Insights from the Behavioral and Brain Sciences.