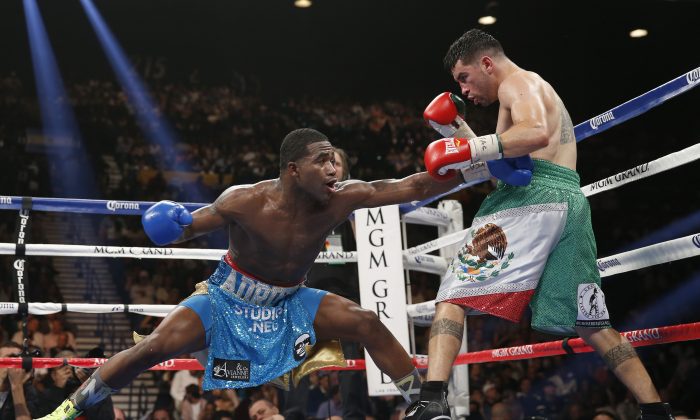 Adrien Broner: Friend ‘Robbed’ and Assaulted; Broner Says He Might ‘Put His Life on the Line’

Adrien Broner posted a video this weekend, saying that he “might die tonight,” and a report says that his friend was robbed and assaulted.

“I’m making this video … just to say all my ‘I love yous'” because “I might die tonight,” Broner said in the YouTube clip titled “Death Speech,” which can be seen below (Warning–contains some profanity):

“I’m willing to put my life on the line for this [expletive]; I’m not playin’,” Broner said.

But a report from gossip site MediaTakeOut said that his friend got “robbed on Sunday.”

The site, citing sources close to the boxer, said Broner “was preparing to RIDE ON THE DUDES WHO DID IT. Hopefully he comes to his senses and doesn’t do anything CRAZY.”

Recently, Broner said that he wants to fight top boxer Manny Pacquiao along with Lucas Matthyse and Marcos Maidana. “I want to fight them all,” he wrote on Instagram.

In an interview, he said that Maidana doesn’t want to fight him again. Broner lost to Maidana via a decision a few years ago.

“[Maidana] don’t want to fight me though. You know why. I gave him the toughest fight on my worst night. I gave him the toughest fight for his career on my worst night. That was one of my funnest fights I was ever in. It was fun. I can’t wait for it to happen again. That’s a fight that changed my life for the better. That was a fight that I know I wasn’t supposed to lose. I beat myself. He didn’t beat me. I could have did some things different. That’s why I changed the way I move now. I’m happy I lost early in my career,” he said, via Global Grind.