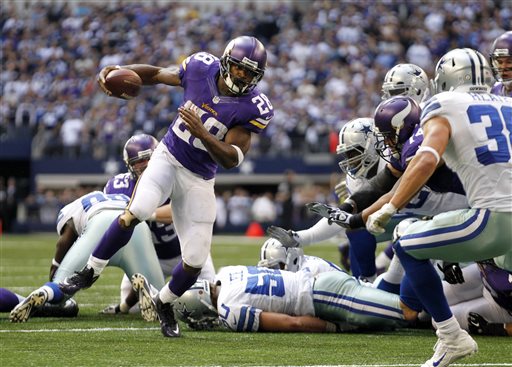 Minnesota Vikings' Adrian Peterson (28) breaks away from tackles as he heads for the end zone on a touchdown run during the second half of an NFL football game against the Dallas Cowboys, Sunday, Nov. 3, 2013, in Arlington, Texas. (AP Photo/Tim Sharp)
NFL

Adrian Peterson was injured during the Minnesota Vikings-Baltimore Ravens game on Sunday. He was carted off the field.

Peterson appeared to suffer a right ankle injury in the second quarter.

He was seen rolling around on the ground in pain.

Peterson was taken off the field, and it appeared he could not walk off under his own power.

Peterson appeared to be favoring his right ankle on the sideline, but it is unconfirmed if that was the injury.

The camera then showed Peterson being carted off the field before he punched the cart out of frustration as it went inside the tunnel.

In Baltimore, heavy snow blanketed the field, which contributed to the players’ poor footing.

Entering Week 14, Peterson had more than 1,200 yards rushing and 10 touchdowns.