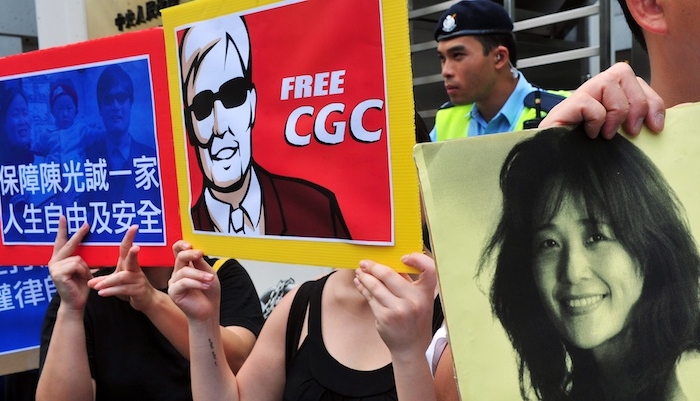 Activists hold banners in support of blind Chinese activist Chen Guangcheng and human rights activist He Peirong, who helped drive Chen on April 22 from his home in Dongshigu village, to a safe location in another province, during a protest in Hong Kong on May 4. (Laurent Fievet/AFP/GettyImages)
China

After seven days of being detained by public security police, activist He Peirong has given further details of blind Chinese human rights lawyer Chen Guangcheng’s dramatic escape from house arrest.

Ms. He announced via Twitter that she has returned home on May 4 and three days later spoke with New Tang Dynasty (NTD) TV via Skype and gave details of Chen’s audacious April 22 escape and flight to the U.S. Embassy in Beijing.

Forty-year-old Ms. He revealed that it took nearly a year to plan the rescue and that after Chen escaped from Dongshigu village in Shandong Province, she received an email from Chen’s family saying: “The bird has left the cage,” Ms He then picked Chen up and drove him to Beijing.

“His escape was entirely his own effort,” said Ms He. “Chen was completely on his own for the first 17 hours and nobody was there to help him.”

“At one point Chen hid in a pigsty and sometimes in farm fields. He also climbed many walls. Chen had nothing to eat or drink. This is a Shawshank Redemption-style flight,” Ms. He said, referring to a well-known movie where the protagonist makes a daring and elaborate prison break.

The rescue operation suffered some setbacks, including a flat tire, taking the wrong route, not finding Chen, and even losing Chen at one point, Ms. He said in another interview with Voice of America (VOA).

Ms. He said she then passed Chen to another activist—whose identity she withheld for safety reasons—to be taken to the U.S. Embassy.

An English teacher by profession, Ms. He said that she visited Chen in Shandong six times last year unsuccessfully but declined to comment about current arrangements, which include whether Chen will leave China or not.

She told NTD Television: “I do not want to comment on any specific things. We thought it was impossible for him to leave the village, yet he had already fled the village. We must believe in miracles, nothing is impossible!”