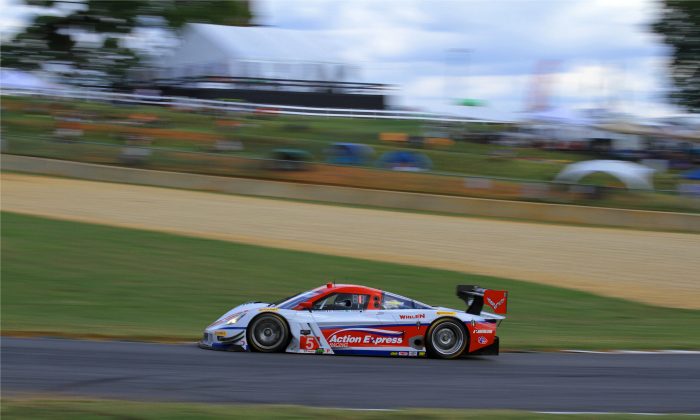 The #5 AXR Coyote-Corvette streaks from Turn 10a to 10b during Thusday afternoon prctice for the 17th Petit Le Mans at Road Atlanta. (Chris Jasurek/Epoch Times)
Motorsports

Bourdais turned the fastest lap of either session, a 1:14.61, half a second quicker that the best effort of Alex Brundle in the #42 Oak Racing Ligier-HondA. Still Brundle in the Ligier took a second-and-a-half off the car’s best morning time.

Gunnar Jeannette turned in the fastest PC lap, a 1:17.533 in the 52 PR1/Mathiesen Oreca he shares with Frank Montecalvo, seven-tenths slower that the best lap of the morning set by the championship-winning Core Autosport team.

GTLM had been led by two Porsches and a Corvette in the morning session, with the Team Falken Tire Porsche 911 RSR topping the times. In the afternoon session, Patrick Long in the #912 Porsche North America RSR was quickest at 1:19.666—not as quick as the car’s morning time, but quickest in GTLM for the session.

Second—almost equal—came the #91 SRT Viper with Marc Goossens lapping the 2.54-mile circuit in 1:19.667, only a thousandth slower.

Jan Magnussen in the #3 Corvette was a relatively enormous four-thousandths off the pace at 1:19.671.

Porsche ruled the GTD class in the morning session, with the three quickest cars and seven in the top ten. Jan Heylen in the #58 Snow Racing 911 America was quickest GTD in the afternoon session with a lap of 1:22.123; GTD points leader Dane Cameron was second at 1:22.563, with Andrew Davis in the #27 Dempsey Racing 911 America next in line with a 1:22.681.

All four classes of the Tudor series practice again Friday morning at 10:10 a.m. EST, and qualifying runs from 4:20 p.m. to 5:40 p.m. Both sessions will be on Timing and scoring, and qualifying will be streamed live on IMSA.com.