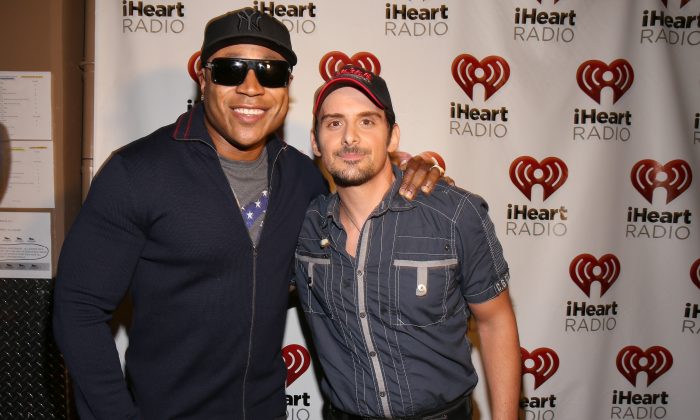 A new song called “Accidental Racist,” a collaboration between country singer Brad Paisley and rapper LL Cool J, has provoked much chatter online about what they were trying to accomplish and whether they succeeded.

Many are saying they made poor choices with the song lyrics.

“If LL Cool J has a career after this, I would have to call it a comeback,” said one Twitter user.

Paisley sings about walking into a Starbucks with a confederate flag on his t-shirt, because he’s a fan of Lynyrd Skynrd, a rock band from the south.

He sings that he’s proud of where he’s from, “but not everything we’ve done.”

“It ain’t like you and me can rewrite history,” he continues. “Our generation didn’t start this nation, and we’re still picking up the pieces, walking on eggshells, fighting over yesterday. Caught between southern pride and southern blame. …. Cause I’m a white man, living in the south land.”

LL Cool J then comes onto the stage, starting off with saying: “Dear Mr. White Man, I wish you understood.”

“What the world is really like when you’re livin’ in the hood,” he sings. “Just because my pants are saggin’ doesn’t mean I’m up to no good. You should try to get to know me, I really wish you would. Now my chains are gold but I’m still misunderstood.”

The duo then begins interchanging lines, with Paisley saying that he’s just a white man coming from the south, and LL Cool J responding that if Paisley doesn’t judge his do rag, he won’t judge the confederate flag on his t-shirt.

“Tryin’ to understand what it’s like not to be, I’m proud of where I’m from,” sings Paisley.

“But not everything we’ve done,” sings Paisley.

The relationship between the south and the north needs repair, sings LL Cool J, and they both continue by saying they want to put the past behind them while making things right.

Paisley said in an interview with Entertainment Weekly that the song wasn’t a stunt.

“I’m doing it because it just feels more relevant than it even did a few years ago,” he said. “I think that we’re going through an adolescence in America when it comes to race. You know, it’s like we’re almost grown up. You have these little moments as a country where it’s like, ‘Wow things are getting better.’ And then you have one where it’s like, ‘Wow, no they’re not.’ “

The films Lincoln and Django Unchained helped prompt the song, said Paisley. “It was really obvious to me that we still have issues as a nation with this.”

The song doesn’t solve anything, said Paisley, “but it’s two guys that believe in who they are and where they’re from very honestly having a conversation and trying to reconcile.”

Paisley spoke to EW before the song was released. LL Cool J doesn’t appear to have spoken publicly about the track.

A range of reactions came from Twitter, where the term is trending in New York and the United States.

“I don’t see anything wrong with it,” said @blakhoode. “People just need something to cry about.”

“Who is responsible for this?” Asked another user, @seanii_love.

Others are calling it “the greatest Chapelle’s Show skit that never happened.”