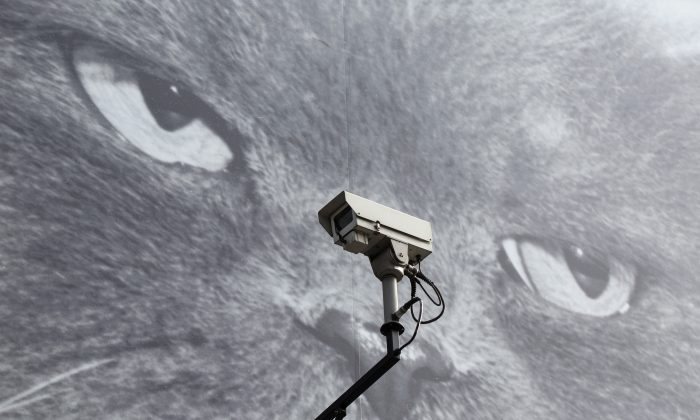 A CCTV camera in front of a giant poster of a cat in London on April 30, 2014. (Oli Scarff/Getty Images)
Opinion

The recent security lapses at the White House have brought to the forefront the 13-year-old question of how to effectively secure public spaces. As officials weigh increasing perimeter security and installing additional checkpoints at public areas adjacent to the White House, it’s worth examining the effects of counterterrorism measures on our urban experience.

Jersey barriers, bollards, restricted areas, CCTV cameras, and security guards have transformed public space in many cities. At the same time, planners and urban advocates strive to balance the desire for safe cities with the need for vibrant and connected public spaces. One hallmark of a democratic society is the ability of citizens to gather and move freely about the city.

Community participation in the planning and design of public areas results in safe and vibrant spaces. There is evidence that noninvasive methods such as crime prevention through environmental design (CPTED), which implements, in the design of spaces, strategies like the creation of good sightlines to put “eyes on the street,” may translate into less crime. But security measures imposed upon people can also detract from public spaces, discouraging gatherings, eliminating services, or even making public space more dangerous.

Some security measures are the result of federal security guidelines and professional threat assessments. Others seem to be reactionary, for instance when officials installed temporary French barriers around Boston’s City Hall Plaza after the 9/11 terrorist attacks. Designed as crowd control devices, they cannot withstand vehicular force or attempted truck bombings. The result is a cordoned-off plaza that simply blocks pedestrians from accessing a vast public space that already has trouble enticing people.

The 2013 Boston Marathon bombings have forced us to focus on security in public spaces once again. But security should not be the sole consideration in how our public spaces are designed and used.

My ongoing research on counterterrorism measures in Boston’s financial district and government center starts with a fundamental question: What were the motives for securing public spaces in the first place?

An environment of pretext securitization and pretext responses—in which “pretext” describes false responses to security threats—is one culprit.

In some office towers, clients compared the secure company headquarters in New York City to the Boston satellite office and wondered why there was such an open door in Boston. This comparison prompted some building personnel to needlessly upgrade security and perimeter protection to assuage fears.

The need for a high level of securitization is often about prestige. In my Boston field research, public officials and building owners boasted of being a “top-ten target,” a kind of security machismo that promotes bigger and better security upgrades wherever possible.

This perceived need for security also satisfies the desire to deflect to another target. Many buildings sport “hardened” perimeters as a tool to entice would-be terrorists to look to the path of least resistance and shift terrorism strikes to neighboring buildings.

To secure necessary insurance and financing, developers and designers drop to the drafting room floor amenities such as an atrium, a rooftop garden, and ground floor retail. In the search for profits, manufacturers of security equipment and the security assessment industry call the design shots. Without expertise in security assessment, owners, architects, and landscape architects turn to equipment manufacturers and consultants to provide design specifications and advice. The security industry is happy to step in.

In these scenarios and others, design follows the money. The Department of Homeland Security enjoyed a 301 percent increase in spending over the decade after 9/11. DHS security funding creates security needs—the result being that every problem can have a security solution.

Alleged security threats also allow some companies to perniciously reclaim privately owned public space for private use and profit. Just two days after 9/11, the owners of the John Hancock tower in Boston decided to permanently close the top-floor Hancock Observatory, the closest thing Boston had to a museum of the city. The decision was never revisited, even as public access was reinstated in high-risk structures such as the Empire State Building and Statue of Liberty in New York City. The public lost an iconic public space while the building owners gained valuable class A office space.

More than a decade after 9/11 it is fair to say that when security measures come, they tend to stay. It is not clear that any security interventions have been dialed back. The prevailing wisdom is still that more is better. And who’s to argue? No one wants to be the one who made the bad decision. An obsession with security creeps into the public realm and into privately owned public spaces and becomes white noise. But this new normal has more to do with private interests than public security agendas.

Susan Silberberg is a lecturer in urban design and planning at Massachusetts Institute of Technology. This article previously published at TheConversation.com.