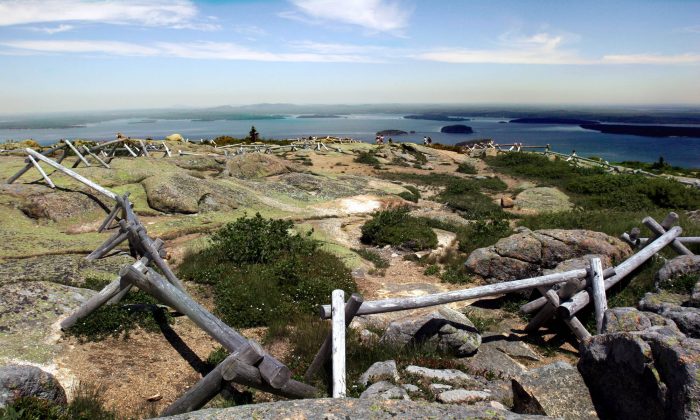 A file photo of the view from the top of Cadillac Mountain in Acadia National Park on June 20, 2005.(AP Photo/Pat Wellenbach/file)
US

Acadia National Park: In Another Accident, Man Falls Over Waterfall

Acadia National Park in Maine has been the site of at least three accidents in the past couple months. On Saturday, a 44-year-old man fell over a waterfall while hiking with his two sons.

It was raining, he lost his footing, and tumbled about 40 feet, according to local publication the Bangor Daily News (BDN). Though Ranger Edward Pontbriand described the hiker to BDN as “pretty banged up,” the man was able to walk a short ways after the fall. The hiker suffered multi-system injuries, including a head injury, and was still being evaluated Saturday evening at MDI Hospital in Bar Harbor, according to BDN.

He and his sons were treated for hypothermia due to the cold wait for help.

Pontibriand stressed the importance of preparedness and caution while hiking, especially in inclement weather.

In May, a woman fractured her ankle on the same trail, about 100 feet away from the spot the man fell. Earlier this month, three rock climbers were injured in Acadia National Park when a rope broke.

Two men tumbled down the 25-foot-high rock face, landing on another climber at the bottom of the cliff. A man and a woman, who were clients of Acadia Mountain Guides, were released from hospital a day later.

Jon Tierney, owner of Acadia Mountain Guides, said his company and the park rangers are investigating. “The systems were technically sound,” Tierney said. “They were following industry standards.”