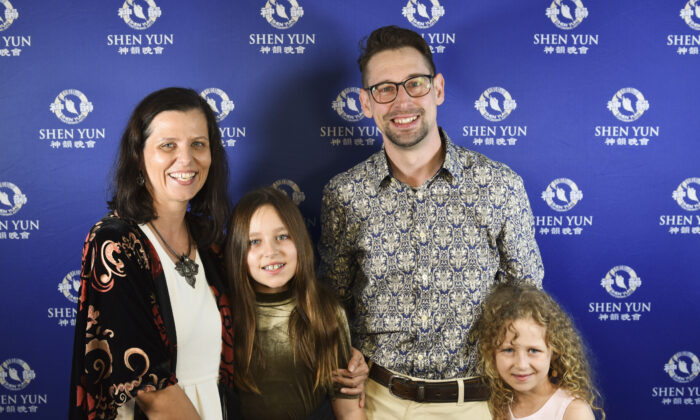 Professional writer and branch manager Mira Sarac (L) and her family attended Shen Yun Performing Arts at the Home of the Arts cultural precinct in Gold Coast, Australia, on May 7, 2022. (NTD)

GOLD COAST, Australia—Shen Yun Performing Arts started the second day of its performing tour in the city of Gold Coast, famous for its beautiful long sandy beach, with a sold-out performance as audience members cheerfully walked to the Home of the Arts cultural precinct with tickets in hand.

Mira Sarac, a professional writer and branch manager of Successful Resumes—Australia’s most experienced network of professional resume writers, attended the Shen Yun Performing Arts with her family on May 7 and described what they saw as a magical experience.

Mrs. Sarac could not hide her excitement as this was the first for her two daughters to see a performance, saying she would walk away feeling grateful while looking forward to finding out how her children felt about the show.

Mrs. Sarac was exceptionally impressed with the backdrop of Shen Yun, praising it for being innovative and integrating well with the mystical and historical elements of the performances.

One unique feature of Shen Yun is its interactive projection backdrop, which allows performers to magically “emerge” or “disappear” during the performances, providing a greater depth to the stories.

Additionally, the synchronisation of Shen Yun performance is another aspect that amazed Mrs. Sarac.

The timing of the dancers and the music is just unprecedented.
— Mira Sarac

“The timing of the dancers and the music is just unprecedented,” she said, adding that the dances and costumes flowed seamlessly.

Among the performances she saw on the afternoon of May 7, Mrs. Sarac felt emotional with the story depicting the persecution of Falun Dafa, a mediation practice that is deeply rooted in the traditional values of the Chinese culture.

Mrs. Sarac had heard of Falun Dafa and the persecution before, and the dance piece touched her heart with its message.

“It is very unfortunate that we live in these times where people have to be in such a way,” she said.

Throughout the two-hour journey, Mrs. Sarac felt that Shen Yun carried the essence of China’s profound culture and history.

The theme of Shen Yun this year is “China before Communism”, in which the performing company is trying to give the global audience a glimpse of what China was like before its culture was almost destroyed by the Communist regime.

“Absolutely magical,” she said. “It’s such a pleasure to be able to come here today after two years of lockdowns.”

Reporting by NTD and Alfred Bui.