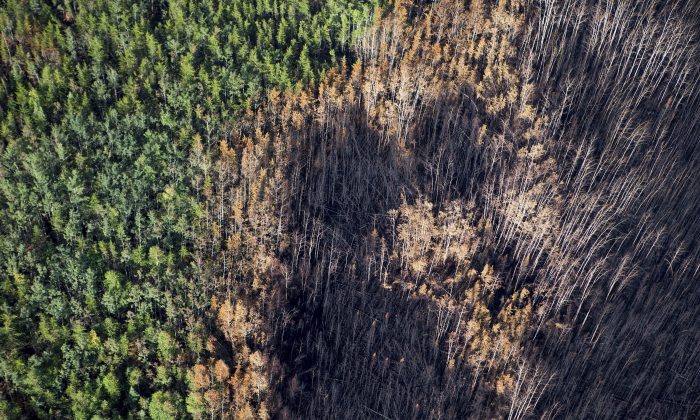 An aerial view of burned forest near Weyakwin, Saskatchewan, on July 15, 2015. About 1,000 fire evacuees in Saskatchewan have received the all-clear to head home. (The Canadian Press/Pool/Liam Richards-The StarPhoenix)
Canada

About 1,000 Saskatchewan Fire Evacuees Get the All Clear to Head Home

About 1,000 Saskatchewan Fire Evacuees Get the All Clear to Head Home

More evacuees were riding on buses or heading home in their own vehicles Wednesday after emergency officials determined wildfires and smoke were no longer threatening some communities in northern Saskatchewan.

Premier Brad Wall said about 1,000 residents would be returning to the region throughout the day and he anticipated others would soon follow.

The fire situation for many communities remained serious, he said.
“There’s room for cautious optimism, but we need to remember that anything can change very quickly and there’s fire very close to a great many communities.”

About 13,000 people were forced out of their homes in at least 50 communities since evacuations began nearly there weeks ago. A higher than average number of fires in the province have destroyed about 90 homes, most of them seasonal cabins.

Firefighters have been brought in from municipalities, other provinces and the United States. Soldiers and reservists are also helping and some Saskatchewan residents are being trained to join the fight. In all, about 1,700 are working on the fire lines.

In recent days, residents from a handful of small communities in the north were allowed to go home. But the largest contingent so far was announced Wednesday.

Karri Kempf with the province’s Social Services Ministry listed evacuees from Pinehouse, the Red Earth Cree Nation and Deschambault Lake as among the latest to get the all-clear.

However, she said some residents with health conditions were likely to remain in shelters and hotels in various cities.

Evacuees at Evraz Place in Regina were told late Tuesday that those not yet going home would be moved to shelters further north, making it easier for them to return later once officials determined it was safe.

“There was a fair amount of relief and positive feelings about being able to join other community members and to be one step closer to home,” Kempf said.

Colin King with emergency management said workers are looking at which communities remain at risk and which have working utilities and road access.

“It’s not as simple, when we’re talking about repatriation, as saying everyone can go home,” he said. “There’s a great deal of co-ordination required.”

Despite some rain in the north, it hasn’t been enough and many fires remains a concern, said Daryl Jessop with wildfire management. Some continue to burn close to La Ronge, a town of 2,700 and the largest community under evacuation.

The premier announced shortly after the evacuations began that the province’s firefighting budget had already been depleted. Wall said Wednesday that officials are still too busy to calculate how much the effort has cost. He expects to have a number late next week.

Wall added that he was confident enough that the fire situation had stabilized for him to head to a meeting of premiers in Newfoundland.