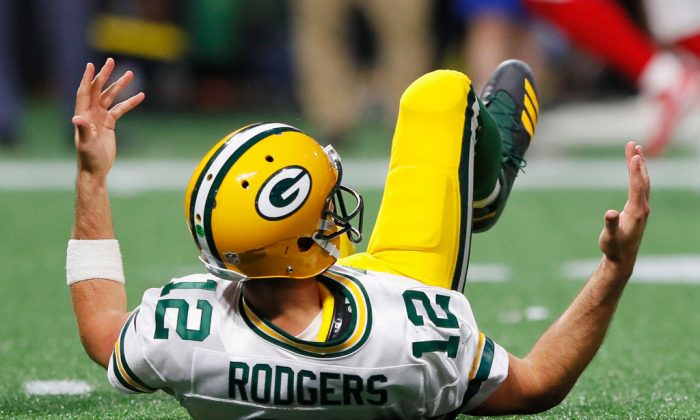 Aaron Rodgers and Green Bay Packers Beg Fans to Support Anthem Protest, Fans Do the Opposite

After being asked to support player anthem protests during the Green Bay Packers game on Sept. 28, most fans chose not to join the team, and instead did quite the opposite, almost staging a protest of the protest.

Chants of “USA! USA!” could be heard from the stands before the anthem started. As the two teams locked arms in what those in the NFL call “unity,” most fans did not join in, even after Green Bay quarterback Aaron Rodgers and Packers team management wrote letters and made statements urging fans to do so, ESPN reported.

Instead, fans held their hands to their hearts, and even waved American flags during the anthem. The sole show of protest still remained among the players and some team staff.

Aaron Rodgers spoke about why he wanted fans to join the football players in protest prior to yesterday’s game.

“This is about unity and love and growing together as a society, and starting a conversation around something that may be a little bit uncomfortable for people. But we’ve got to come together and talk about these things and grow as a community, as a connected group of individuals in our society, and we’re going to continue to show love and unity,” said Rodgers, via CBS.

Rodgers has not stated how all those goals will be achieved as a result of pre-game, televised actions during the singing of the national anthem.

After the game, when asked about his feelings on fans not joining him and the team in protest, Rodgers appeared disappointed, although he was happy with the win over the Bears.

“Well it was an invitation to join us. The beauty is it’s a free country, so they can choose to do it or not,” said Rodgers at a postgame press conference. “As much as some people want us to just shut up and play football, and keep the politics to the politics, sports and politics have always intersected.”

Further comments indicated Rodgers’s willingness to keep up the protests despite objection from fans, ticket holders, or the president.

The Packers are not the first team to experience fan rejection of on-field protests. A notable example happened earlier this week when the Dallas Cowboys were booed after the the team, coach, and even team owner Jerry Jones locked arms and took a collective knee prior to a game.

NBA Hall of Fame athlete and former NBA MVP Charles Barkley weighed in on the matter of what effect the protests are having, in an interview on “The Dan Patrick Show.’

Barkley himself said he would stand for the anthem. He went on to stress the murky messages and blurry goals that pervade the anthem protest trend, and how the media is the main beneficiary.