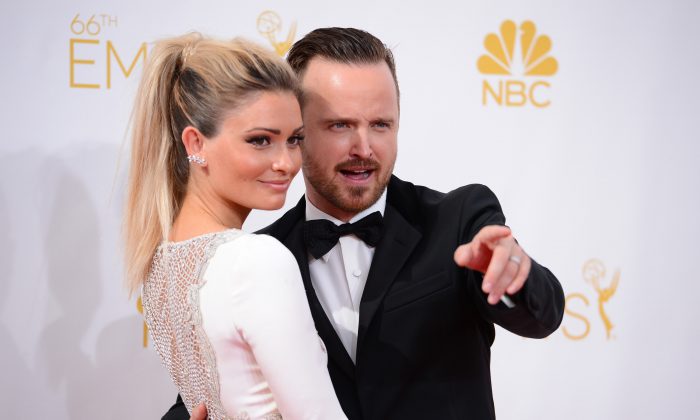 Aaron Paul’s wife Lauren Parsekian was highlighted by Paul during his acceptance speech at the Emmy Awards on August 24.

Parsekian helped start the charity Kind Campaign, which is a non-profit organization that seeks help educate and confront the negative effects of female-to-female abuse.

Paul in his speech thanked Parsekian for marrying him and also complimented her on her work with the charity.

Paul won the award for best supporting actor in a drama for portraying Jesse Pinkman in Breaking Bad.

Paul and Parsekian were married in 2013.

They do not have any children as of yet.

Paul has often been supportive of his wife.

“I couldn’t be more proud of her. I feel so blessed to be able to share this evening with her – let’s be honest, I feel blessed to share any evening with her,” Paul told People near their anniversary earlier this year at the Open Hearts Foundation 4th Annual Gala.

“The back of my head hurts from smiling so much. I always sit back and applaud her on a day-to-day basis. It’s nice to see everyone else applaud her tonight.”

“Marriage is the greatest thing that has ever happened. Look how cute she is,” he added. “[The first year has] flown by – blink of an eye. [We’re] going strong.”

Besides her charity work, Parsekian is listed as an actress in a television movie of NCIS, a producer on the documentary Finding Kind, and being herself on a Dr. Phil episode.

She doesn’t often speak to reporters but told People at the event that she loved when Paul had a beard.