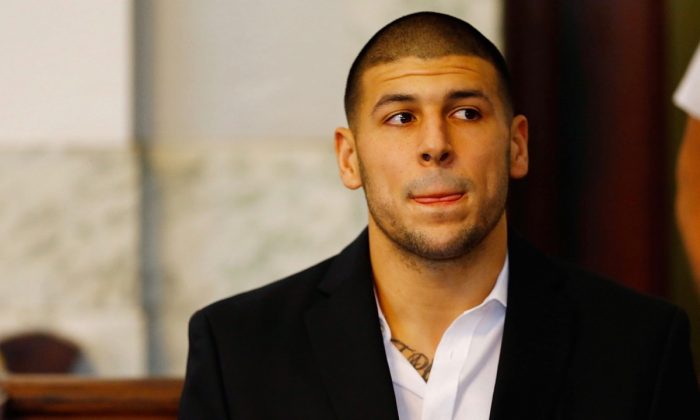 Former NFL star Aaron Hernandez was found to have severe CTE at the time of his suicide, while serving a life sentence.

Hernandez’s lawyer released the results of a study that happened after Hernandez’s brain was released to researchers. The result was one of the worst CTE cases ever for a person of his age, according to lawyer Jose Baez via CBS Boston.

Hernandez was serving a life sentence for the 2013 murder of Odin Lloyd, a semi-professional football player who dated Hernandez’s fiancée’s sister. The suicide means the conviction has been dropped, since he could have still appealed the ruling. Lloyd’s family is fighting to keep the conviction. A separate lawsuit against the late Hernandez needs the conviction to stand on, according to CNN.

Staff at Souza-Baranowski Correctional Center in Massachusetts said they found Hernandez hanging by a sheet tied around his neck. It was just days after he had been acquitted of a separate case, the double murder of two Cape Verde immigrants after encountering them at a bar. CNN reported that he also had not yet exhausted appeals in the life sentence case, and prisoners said he was positive about eventually returning to the NFL.

The CTE findings add another element to the reason Hernandez found himself in such legal trouble despite breakout success in professional sports. It broadens the scope of motives for the violence. It was previously thought that the death of his father and subsequent drug use and drug dealing friends impacted the path he took.

Hernandez’s story now becomes part of the larger dialogue that football is waging with the CTE brain condition. A result of repeated head impacts, CTE is known to cause aggression and a lack of impulse control. The disease was discovered in only the last 10-15 years. In recent years, movies and reports characterize the NFL as fighting to hide CTE’s impact on players, hoping to lessen the controversy.

Hernandez’s lawyer pointed to results indicating his 27-year-old client’s brain was in the same condition as a 67-year-old with brain trauma. The new lawsuit hopes to hold football responsible for its role in Hernandez’s wild behavior, and benefit his fiancée and daughter, but it could have much larger implications on the NFL and the growing concern about the brain condition on the sport as a whole.

Sports analyst Stephen A. Smith said on ESPN’s “First Take” that he thinks that Hernandez’s CTE and legal situation should be seen differently, and that the lawsuit on behalf of his daughter isn’t valid. He points out how Hernandez’s trouble with violence started back when he was in college at the University of Florida. He compares the case to other NFL players who had CTE and even committed suicide because of it, but who did not have violent backgrounds or commit murder. He doesn’t feel the family can completely blame CTE, the NFL, or the New England Patriots for everything about Hernandez.