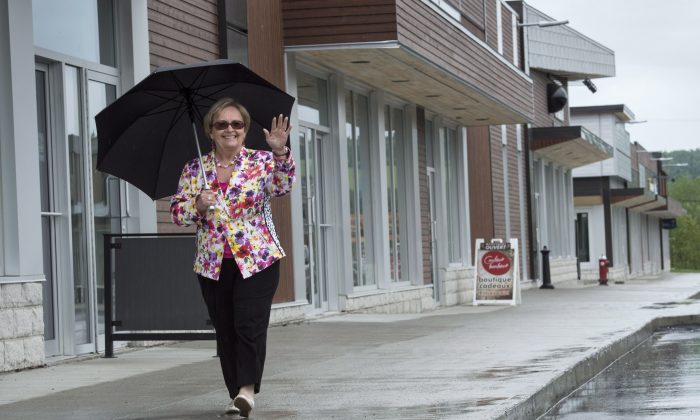 Mayor Colette Roy Laroche walks along the street of Lac-Megantic’s new downtown core on June 10, 2014. One year after a runaway train destroyed part of the Québec town, echoes of the disaster still haunt people in the region. (The Canadian Press/Paul Chiasson)
Canada

Community still struggling to rebuild, recover
By The Canadian Press

LAC-MEGANTIC, Que.—Yannick Gagne still pictures the faces of the people at his bustling Quebec bar last summer, many of whom vanished when an oil-filled train screeched off the nearby tracks and exploded in Lac-Megantic.

Even a year later, the owner of the Musi-Cafe still thinks about where his regulars were sitting the night of the deadly July 6 crash. He often wonders whether they even had time to react.

“What did those people see? What did they think?” Gagne said in an interview in Lac-Megantic, only metres from where his pub, the epicentre of the disaster, once stood.

As the first anniversary approaches, echoes of the disaster still haunt people in the region, including Gagne who had left the Musi-Cafe less than an hour before the tankers jumped the tracks.

The Musi-Cafe was hopping when the derailment wiped out part of downtown Lac-Megantic and killed 47 people. Gagne estimates about 30 of the people who died that night were at his watering hole, where patrons were enjoying drinks and music.

For Gagne, the months that followed the disaster produced sleepless nights, enormous amounts of stress and gaps in his memory.

“It was the worst night—nightmare—of our lives … It was hell,” said Gagne, who lost staff members in the disaster.

Gagne is far from alone in the community of 6,000, which is still struggling to rebuild and recover.

The regional health authority says hundreds of townsfolk have sought psychological help since the crash, and more people have continued to reach out for assistance every week. The clinical co-ordinator for the service says many of the locals they treated were suffering from post-traumatic stress disorder and experiencing symptoms such as flashbacks.

“Many, many of them have been left with after-effects of the disaster,” said Mychelle Beaule, adding that a handful of locals developed a “terrible fear” of the tracks that zigzag their way across the railroad town.

Meanwhile, signs of the disaster are impossible to miss for the people of Lac-Megantic.
Backhoes and dump trucks have replaced tourists on historic Frontenac Street, where crews continue cleanup work behind a fenced-off area that encircles the still-devastated downtown.

The community’s waterfront park remains inaccessible, as do many homes and businesses inside the perimeter. The odour of petroleum still wafts near the crash site, where millions of litres of crude oil gushed from the smashed tanker cars into the soil, river, and lake.

These painful reminders will be compounded this weekend, when many in the community will be forced to grapple with planned anniversary events. The town will mark the anniversary with activities that include special Roman Catholic masses, the unveiling of a monument, and a 47-minute candlelight walk to honour the victims.

“It was a year to forget,” said Gagne, who remembers seeing the fireballs from his home about a half-kilometre from the Musi-Café. He can also recall the people running through the streets screaming in terror, including one of his waitresses who managed to escape the burning bar.

He’s reconstructing the Musi-Cafe only metres from its former location, across the tracks that cut through Lac-Megantic. He hopes the new bar, which will once again serve a wide selection of microbrews and host concerts, will be ready to open its doors by September.

Gagne, who is increasingly optimistic about the future of the town, said locals encouraged him to rebuild as a way to help restore a key gathering point for Lac-Megantic.

“I think that anything is possible. We must act softly and intelligently.”