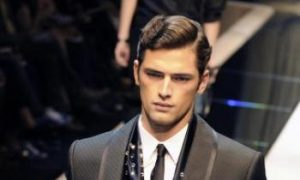 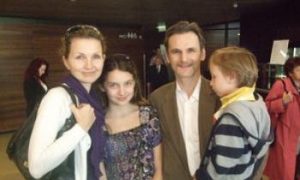 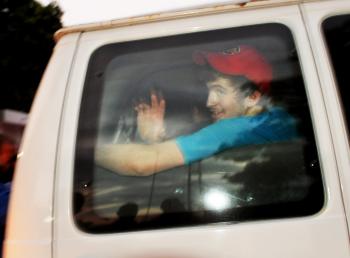 One of the American missionaries held in Haiti on charges of kidnapping children in the wake of last month's massive earthquake waves from the back seat of a van after they were released from jail on Feb. 17, and driven to the airport. Eight of the 10 Ame (Roberto Schmidt/AFP/Getty Images)
US

A Year After Earthquake, Protesters Demand Faster Relief for Haiti

By Diana Hubert
Print
NEW YORK—“Help heal Haiti!” shouted hundreds of protesters as they marched from Times Square to the Haitian Consulate and the United Nations on Wednesday, exactly one year after the 7.0-magnitude earthquake hit the island, killing over 300,000 people and displacing millions.

Hundreds of Haitian flags waved in the air, as protesters demanded an end to the slow relief and recovery. They asked for clean water and sanitation, removal of all rubble, creation of jobs, and safe housing for the nearly one million people living in the 1,000 camps around the devastated country.

“There are more than one million people who are still living in miserable tents,” said Charles King, president and CEO of Housing Works, while expressing dissatisfaction with the pace of the relief efforts.

“Help build a civil society in Haiti, so [that] Haiti can build itself without your charity forever,” said King, addressing the major international relief organizations.

“We’re here to raise our voices, and we’re here to say that we will not stop. Today is just the beginning,” said Brooklyn Deputy Borough President Yvonne Graham. “To all of the families who have lost loved ones, we hope that you will find some peace knowing that we’re all here fighting for you, fighting to say, 'Enough is enough.'”

Brooklyn has the largest Haitian population in the Northeast, according to Graham.

“The Brooklyn flag and the Haitian flag read the same—in unity there is strength, and so today all of Brooklyn joins together in solidarity,” she said.

In a video posted by Diaspora Community Services, a group that initially started as the Haitian Women’s Program in response to the refugees fleeing Haiti in the 1980s, about a dozen New Yorkers explained why they would be marching for change on the anniversary of the earthquake.

“I’m marching because it’s time to remove the rubble,” one woman said.

King blamed in part corruption of Haitian politicians for the slow relief.

The one-year anniversary of the earthquake also marks termination of visitor visas for many Haitians who flocked to family members living in New York following the disaster, reported the New York Daily News. There is a great concern that these people will likely have to return to desperate conditions in Haiti, which continues to struggle to rebuild.

Six men and four women were arrested for blocking traffic during the rally.