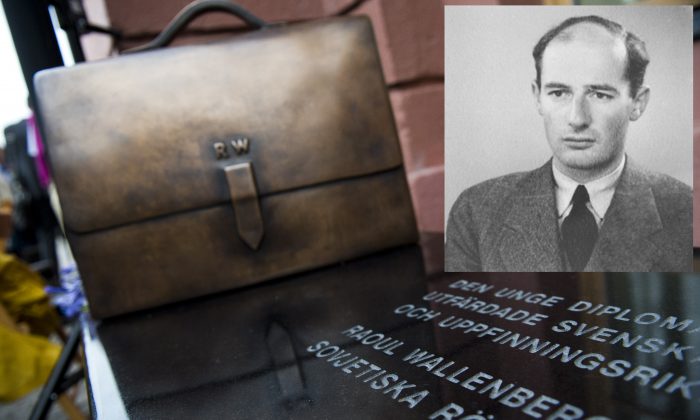 A memorial to Raoul Wallenberg outside the Ministry for Foreign Affairs in Stockholm, Sweden, on Aug. 16, 2012. (Jonathan Kackstrand/AFP/Getty Images)
Opinion

Or adventurers and explorers.

Think Charles “Lucky” Lindbergh and his trans-Atlantic flight in Spirit of St. Louis.

But diplomats as heroes?

Somewhat ruefully, as an ancien diplomat, I must admit that pure physical courage is not required for successful operation within the corridors of foreign ministries or the presentation of demarches to foreign governments.

To be sure, diplomats die. We are sent in harm’s way embedded with armed forces. We are murdered by kidnappers or blown up by terrorists. But we are typically not “disappeared.”

Raoul Wallenberg (Aug. 4, 1912 to July 17, 1947 [presumed]) is one of a kind in every particular. Wallenberg was one-sixteenth Jewish and reportedly proud of that genetic heritage.

A Swede whose father died before he was born, Wallenberg lived and traveled in the United States, obtaining a degree in architecture from the University of Michigan in 1935. Upon returning to Sweden, he found that the U.S. architectural degree didn’t qualify him to practice in Sweden.

Family connections got him a job in South Africa and later in Haifa. However, he returned to Sweden in 1936 and eventually became engaged in export/import trade with a Jewish businessman in Hungary.

During the early years of World War II, Hungary was a Nazi ally. As such, Hungarian Jews were not persecuted on the level of Jews elsewhere in Europe. Apparently dismayed at the extent of Hungarian troop losses fighting alongside of the German-Nazis, Hungarian leadership began maneuvering to make peace with the Allies.

Germany, however, catching wind of this betrayal, occupied Hungary in March 1944 and began subjecting Hungarian Jews to the same persecution/deportation afflicting Jews throughout Europe.

After complex maneuvering, Wallenberg received a diplomatic appointment at the Swedish Embassy in Budapest. It was almost too late for Hungarian Jews. With the brutal efficiency that characterized German Nazis, over 400,000 Jews had been deported to death camps before Wallenberg arrived in July 1944.

At this juncture, Wallenberg acted with creativity and alacrity to save as many of the 240,000 remaining Hungarian Jews as possible. He issued “protective passports” identifying individuals as Swedish citizens awaiting repatriation to Sweden. At one point, he even distributed such passports to Jews in railroad cars awaiting deportation, permitting him to argue for their release. An unofficial estimate suggests that he saved 100,000 Jews from the death camps.

As the Soviet Red Army surrounded and besieged Budapest, Wallenberg stayed in the city. Eventually, the Soviets arrested him—and at that point, his story becomes murky. There are intimations that the arrest was connected with belief he was involved with U.S. intelligence.

That he died in Soviet hands in unquestionable, but the time and circumstances cannot be specifically determined. Options include that the Gestapo killed him and his driver; that he died in Moscow’s Lubyanka Prison of a heart attack or stroke (and then cremated without autopsy); or was executed at Lubyanka; or poisoned while at Lubyanka. Such reports exist concurrently with reports of sightings of Wallenberg by former prisoners.

It is this puzzlingly inconclusive legend that drove Western efforts to determine Wallenberg’s exact fate. It is not cynical to note that Wallenbergs historically are a significant presence in most large Swedish industrial groups. In 1990 and subsequent years, the “Wallenberg sphere” reportedly controlled nearly one-third of the GDP of Sweden with commensurate influence domestically and internationally.

Researchers hoped that the 1989 collapse of the Soviet Union might open previous secret files, including those relating to Wallenberg’s fate. However, document files made available have provided no definitive information.

Perhaps this is the best conclusion. Wallenberg remains a powerful symbol of what one man can accomplish against great odds, acting fearlessly against dictatorial authority. It is the absence of such heroes that make subsequent genocides (Cambodia, Rwanda), massacres in Bosnia and Sudan, or the ongoing attacks on Christians in Iraq and the Middle East all the more bitter to contemplate.

We have recognized Wallenberg … but we have not honored his example by preventing subsequent slaughters.

We have recognized Wallenberg with honorary citizenships, statues, stamps, and commemorative speeches. But we have not honored his example individually or corporately by preventing subsequent slaughters.

Perhaps, just as there is only one Holocaust, there will only be one Wallenberg.