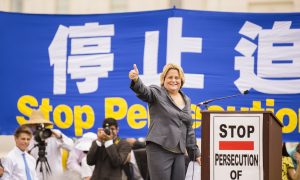 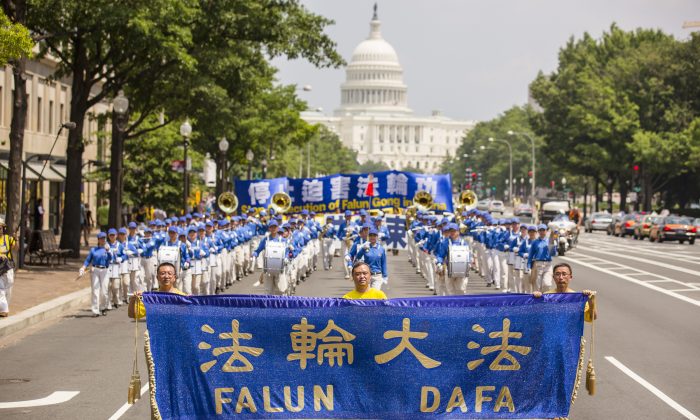 Three Falun Dafa practitioners lead the Divine Land Marching Band with a blue and gold banner. Adherents of the practice march down from 3rd & 4th Street to the Monument in Washington, D.C. on July 18. (Edward Dai/Epoch Times)
China

A Solemn Parade Through US Capital Reminds of Persecution in China

Practitioners of Falun Gong march through the city, marking 14 years of persecution
By Shar Adams

WASHINGTON—Around 1,500 Falun Gong practitioners and supporters proceeded solemnly through the streets here on July 18, marking the 14th year since the Chinese regime began a violent persecution of their faith in China, in a grand march from Capitol Hill to the Washington Monument 1.5 miles away.

The practitioners were mostly silent in their march—except for the marching band and the drumming corps—and all expressed unrelenting tenacity in the face of the ongoing campaign in China. In interviews, many of them said they wanted only one thing: for the persecution to stop.

Led by the Divine Land Marching Band, supporters from around the world and as close as New Jersey and Maryland carried banners that read “Falun Dafa is Good” and “Stop the Persecution of Falun Gong” as they made their way down Pennsylvania Avenue.

“We have to speak the truth for the public,” said Kate La, who had traveled from New Jersey. “They don’t know what is happening to Falun Gong.”

According to the Falun Dafa Information Center, Falun Gong, also known as Falun Dafa is “a spiritual discipline in the Buddhist tradition.” Founded by Mr. Li Hongzhi in China in 1992, the practice consists of moral teachings and five exercises, including a meditation.

Recognized for its health benefits, Falun Gong quickly became popular in China; by 1998, according to official statistics, over 70 million Chinese people were practicing it. In July of 1999 the Chinese Communist Party leader Jiang Zemin perceived that Falun Gong was too popular, and was competing with the Party for hearts and minds, so he began a brutal persecution to “eradicate” it.

Those allegations are the subject of House Resolution 281, which condemns the practice of organ harvesting from Falun Gong detainees and other prisoners of conscience.

Alan Adler, executive director of Friends of Falun Gong, an advocacy group, said the resolution was a positive move, and believes there should be more bipartisan and louder action from both Congress and the Administration on the issue.

“The United States has a responsibility to speak out and the people expect their leaders to do that,” he said. “It is part of the history of our country.”

Adler said he would have preferred it if it was not necessary to be in Washington D.C. for the 14th year in a row, the march and rally having already become part of the fabric of D.C.’s protest calendar, to Adler’s regret.

Cameo Sherman and her children, Theta, Kai and Ethan, live in Maryland and watched the parade from the sidelines. They had just come out from an exhibition on the First Amendment.

“It was good for the kids to see the First Amendment in practice,” she said.

The family was shocked to hear about the persecution. “I only knew about mad stupid debts,” said Ethan, 8, using the word ‘mad’ as slang for ‘very,’ referring to China’s holding of American treasury bonds.

Theta, 11, who said she would like to be president of the United States one day, said she would certainly support Resolution 281 if she were the one voting. “It is gruesome selling body parts,” she said. “I hope it doesn’t happen here.”

A 50-year-old woman, Terry Green, shaded herself with a black umbrella as she stopped to watch the procession of colorful banners. After learning about Falun Gong and the persecution, Green declared “I’m going to go look this up now.” She was surprised at what she heard about torture in labor camps, and said practitioners “should be allowed to express their religious freedom.”

“I’m glad I’m here to see this,” she said, smiling. “That’s a beautiful thing to stand for and to believe in. That’s what America’s all about.”

Leslie Schoop, who traveled to New Jersey from Germany in 2011 to attend graduate school at Princeton University, majoring in chemistry, learned of the persecution through her classmate, Huiwen Ji, a Falun Gong practitioner originally from Zhejiang Province in China, and decided to join the parade on Thursday.

Schoop was impressed by “how many people are here; many Westerners and people from different places. But it’s so quiet and peaceful.”

Hearing about the persecution of Falun Gong in China was “enlightening,” said Chaitram Misir, a New York Life Insurance agent. “I couldn’t believe something like this was happening, so that’s the reason I’m here—to be supportive of it.”

Misir, 44, said he was missing work to attend the parade; what had made an impact on him about the parade was “the support” practitioners were giving the issue, and their commitment to “show that it’s something that’s not right, and take a stand about it,” he said.

A man from yet another walk of life, the 42-year-old George Li, held a blue banner while recounting his life in Beijing, from 1996 to 2004. He said that he wanted to be in the marching band but in the end wasn’t selected, though was proud to be playing a role. “A lot of persecution goes on in China. Many fellow practitioners that I knew were imprisoned,” he said.

Li was locked in a detention center for around fourteen days in March 2000 for his practice of Falun Gong—a comparatively short period, given the jail sentences of over a decade that are sometimes meted out by Chinese authorities to Falun Gong practitioners.

Now a mechanical engineer living in New York, Li said that he wishes for “the U.S. government to stand up for these people’s freedom of belief and human rights.”

Li added: “They should have done the job a long time ago.”