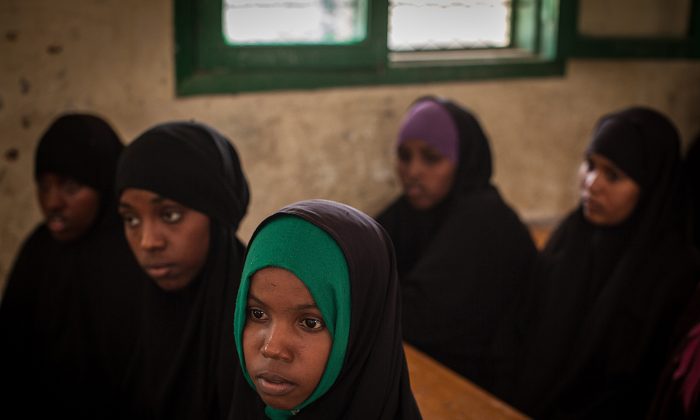 Women take part with other young women and men in a discussion on female genital mutilation (FGM) at an after school program for children's rights in northern Somalia on Feb. 19, 2014. (Nichole Sobecki/AFP/Getty Images)
Opinion

A Safe Alternative to Female Circumcision

Female circumcision, also called female genital mutilation (FGM) is widely practiced in 29 countries in Africa and the Middle East. More than 125 million women have been subjected to different forms of genital mutilation across Africa and in areas of western and southern Asia, and 2 million women undergo the procedure annually. According to UNICEF, 91 percent of women age 15–49 undergo this procedure in Egypt.

It is also carried out in Australia, Canada, England, France, and the United States among immigrants from countries where it is performed as a ritual. Female genital mutilation is internationally recognized as a violation of the human rights of girls and women. FGM has no health benefits to women. On the contrary, by removing normal, healthy genital tissue the procedure interferes with the body’s natural functions. A new rite to replace this practice offers hope to change this situation.

An alternative—and safe—rite to traditional female genital mutilation has been used for many years in some African countries. If more extensively used, it can contribute to putting an end to a practice that has caused considerable harm and suffering to millions of women worldwide.

This new rite was initiated in the Tharaka District in Kenya in 1996, and grew out of the collaboration between a women’s Kenyan group, called “Maendeleo Ya Wanawake Organization” (MYWO) and the Program for Appropriate Technology in Health (PATH), a nonprofit, international organization whose aim is to improve the health of women and children in developing countries.

The alternative rite initially practiced in Kenya is known as “ntanira na mugambo” or “circumcision through words.” Young women go through a weeklong program of counseling, training, and education, capped by a day designated as the “coming of age day,” when members of the community join for a celebration with music, dances, and feasting.

The rite consists of a week of seclusion. In it, the adolescents are taught basic concepts of anatomy and physiology, sexual and reproductive health and hygiene, and are counseled on gender issues, respect for adults, how to improve their self-esteem, and how to deal with peer pressure.

The program recognizes the girls’ need for recognition, so they receive a certificate, presents, are granted special wishes, and become the center of attention in the community during the final day of celebration. The mothers, many of whom act as peer educators, are then able to convert the fathers and the rest of the family.

A similar ritual, in which the girl is declared a woman without maiming her for life, is carried out in Uganda among the Sabiny tribe of farmers. What makes the Uganda case particularly interesting is that the clan elders, who formed the Elders Association in 1992, decided to outlaw FGM and promoted the new rite to replace it. Because of their work they received the 1998 United Nations Population Award.

This new rite has hopes of success because it offers an attractive alternative rather than a blunt prohibition to a long-established cultural practice. It could thus become one of the most significant measures toward improving women’s health and quality of life on a large scale.

This alternative rite is similar to ceremonies practiced in other religions. In the Jewish faith, after years of training in religious principles, history and family matters, 12-year-old girls go through a ceremony (bat mitzvah) that signals their passage to womanhood. It also indicates that from then on they become full-fledged members of the Jewish community with all the responsibilities that come with it.

Among Hindu and Buddhist women living in regions of Nepal and in Southern India, girls are kept in the dark for 12 days immediately following menarche, during which they are not allowed to see a man’s face or to take a bath. Afterward, they bathe and there is a ceremony with feasting and presents indicating their entrance into womanhood.

In many societies FGM is considered a cultural tradition, which has been used as an argument to continue its practice. In other societies, the prevalent view is that it is recommended in religious texts. There is no evidence, however, to support this last assertion.

FGM can provoke serious psychological and bodily harm to women who undergo the procedure. Research on this issue has shown that if communities decide to abandon FGM, the practice can be eliminated very rapidly. The use of this alternative and safer procedure can protect women from harm and help them lead healthier, more fulfilling lives.

Dr. Cesar Chelala is an international public health consultant and a winner of an Overseas Press Club of America award.