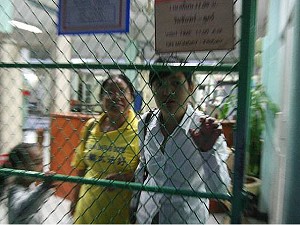 We are astonished to learn today that the Thai police have arrested 22 Falun Gong practitioners in Bangkok and transferred them to the immigration prison.

They have been granted refugee status by the United Nations High Commissioner for Refugees and are waiting for the reception by a third country to start their new lives.

Thailand is a free and democratic country with Buddhism as the state religion, and is a peace loving and compassionate country. Falun Gong, founded by Mr. Li Hongzhi, is a branch of Buddhism. It preaches “truthfulness, compassion and forbearance” and promotes universal salvation. Buddhism and Falun Gong are interlinked.

During their stay in Bangkok, these 22 Falun Gong practitioners have not violated any Thai laws or committed any acts that affect Thailand's national interest. The sudden arrest by the Thai police is a serious infringement of human rights.

During the cold war era of the last century, Thailand held a strong anti-communist stand, defended the value of human civilization and protected the principles of a free democratic society.

Although the global communist camp does not exist any longer and the Soviet Union has disintegrated, the Chinese Communist Party (CCP) is still ruling China. The regime is threatening the principle of freedom and democracy in human society, and is destroying the basic principles that the United Nations promotes. It has become the negative force and power of destruction to the development of human society. This is the cruel reality that human society is facing. The CCP regime is being abandoned by history and the Chinese people.

I am writing to your Excellency in the hope that you will understand the reason behind this event and its latest development, and hope your Excellency will resolve this incident based on human rights consideration and grant these 22 Falun Gong practitioners their freedom.

May Buddha and God bless Thailand

Highest respect to your Excellency