A Kentucky Derby to Remember 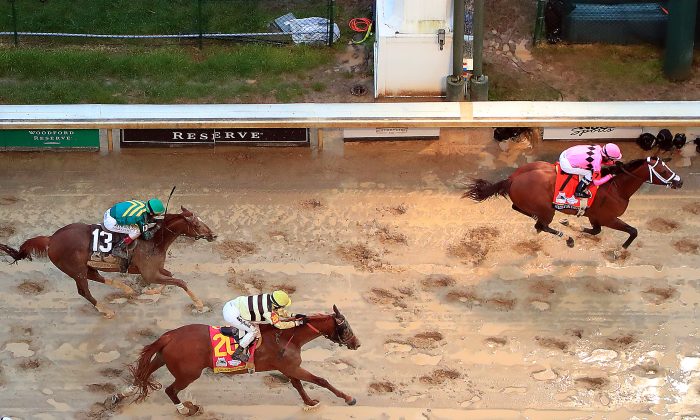 Country House #20, ridden by jockey Flavien Prat, crosses the finish line to win the 145th running of the Kentucky Derby at Churchill Downs in Louisville, Ky., on May 4, 2019. Country House #20 was declared the winner after a stewards review disqualified Maximum Security #7. Jamie Squire/Getty Images)

You’ve heard the news: For the first time in its 145-year history, Maximum Security, the horse that crossed the finish line first in the Kentucky Derby, was disqualified for having committed a foul against three other horses.

After 22 minutes of watching replays, the three-member panel of stewards (judges) awarded the victory to the second-place finisher, Country House, a 65-to-1 long shot.

I never thought I would find myself writing about the Kentucky Derby. Horse racing doesn’t interest me. Neither does auto racing, or any race of humans that goes farther than 200 meters. Watching competitors run in circles (well, ovals)—whether on their own two feet, on the back of a horse, or sitting behind a steering wheel—bores me. (The one exception: I was captivated by Secretariat back in 1973. Big Red had once-in-a-lifetime charisma and excellence. If you have never seen the 2010 film “Secretariat,” it’s a great movie about the horse, as well as its owner.)

Self-disclosure: I didn’t watch the Derby. I’m always afraid that there will be an accident or injury that necessitates euthanizing one of those magnificent creatures. I’m no animal rights zealot. I’m fine with hunting (well, not all hunting; anyone who shoots an elephant or rhinoceros isn’t welcome at my table). But when the lives of beautiful horses are a price willingly paid to satisfy humans’ craving for entertainment, it seems like a primitive barbarism to me—something jarringly incongruous with modern society.

I know that owners, trainers, and jockeys love their horses, but is the lure of money and the thrill of competition so great as to perpetuate a sport that necessarily entails the sacrifice of even a small percentage of the participants? It was shocking to me to learn that 23 horses have died just at the Santa Anita Park racetrack in California alone since the day after Christmas. Twenty-three? Are you kidding me?! That number may be an outlier, but it’s still an awfully grisly toll.

Obviously, I’m in a minority with my queasiness and misgivings about horse racing. Americans love horse races, and the venerable Kentucky Derby has earned its standing as the premier event in the sport. I can’t escape the feeling, though, that the horses themselves are an afterthought for many of the 150,000 individuals who attend the race in person and the millions more who watch it on TV. Of course, there are people like my wife who watch the race because they admire the horses themselves.

For many, however, the fun goes way beyond the 125 or so seconds that the race lasts (friends of friends had expensive box seats with such poor sight lines that they couldn’t see the race. But it wasn’t a deal-killer for them. They still enjoyed the hours of pageantry, the amazing array of flamboyant ladies’ hats, the tradition of drinking mint juleps, and hearing the song “My Old Kentucky Home.”

The Kentucky Derby is a cultural fixture. Its popularity tells us a lot about ourselves. President Donald Trump weighed in with (what else?) a tweet, grousing that the “decision was not a good one.” I can’t help but think that having spent a career in the rough-and-tumble world of real estate development, plus having endured the collisions in the great American contact sport known as presidential campaigns, the president might naturally conclude that some physical jostling in the race shouldn’t matter. I just hope that congressional Democrats don’t call for an investigation as to whether the president placed bets on the Kentucky Derby through a Russian bookie.

Humor (or feeble attempts thereat) aside, I’d like to make a more sober point. The human fascination with gambling seems to be the driving force behind the popularity of horse racing in general and the Derby in particular. Millions (billions?) of dollars changed hands on May 4. When the decision to disqualify Maximum Security was announced over the PA system, it was greeted with boos. Hey, wait a minute: Don’t Americans believe in fair play? Don’t they want a legitimate winner—one that hasn’t broken the rules? Normally, yes—but not when money is involved.

What looked like a safe bet on the favorite that had paid off quickly became a loss for many, many bettors. Ouch. Of course, the bitterness of those who had victory snatched away from them was mirrored by the jubilation of the relative few who had bet on the 65-to-1 long shot and suddenly enjoyed a spectacular payoff.

Gambling casts a pall over all sports. (No, gambling shouldn’t be banned. Individuals should have an untrammeled right to do what they want with their money, as long as they aren’t violating anyone else’s rights in the process.) Gambling on sports is a killjoy. It prevents the bettor from enjoying the sporting event for its own inherent drama, strategy, performance, and outcome. It abandons the uncomplicated simplicity of rooting for one’s team (or horse, car, etc.) to win, and being happy or not so happy with the results. I’ve seen friends watching a sports contest and not caring as much about which team won, but which one beat the point spread, or which players reached certain benchmarks in fantasy football.

For old-fashioned types like me, sports contests have a simple purity: It’s the good guys versus all comers—and what joy there is when the good guys win! For millions of other Americans, sports has become an excuse for betting money. Then they hate the athlete(s) who didn’t win and supposedly cost them money—even though the athlete(s) wasn’t involved in the decision to gamble. As economic theory teaches us, we each choose the course of action that we value more over alternatives that we value less. Well, to each his own.

Finally, a brief compliment to the stewards: The pressure on them must have been enormous. I’m sure they wished with all their might that they had never been put in the position of having to decide the winner of the Kentucky Derby. It’s to their everlasting credit that they averted the temptation to take the easy way out by overlooking the foul and declaring the favorite the victor. Instead, they made the unpopular decision to uphold the rules and thereby preserve the integrity of the Kentucky Derby.

Hats off to them.