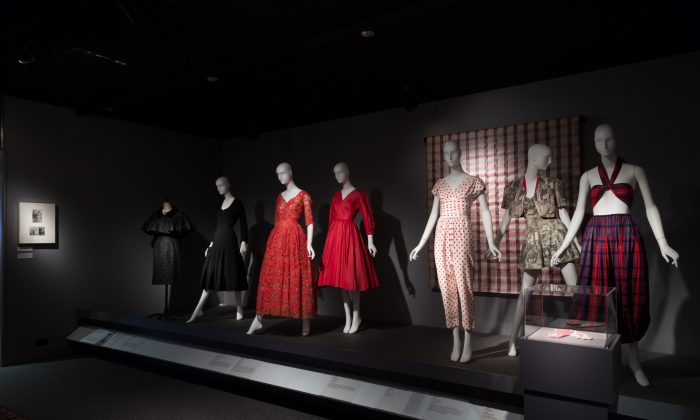 A Journey Through Fashion’s Seminal Moments

In the 1850s, a well-to-do lady in Paris would go to her dressmaker, where the dressmaker would ask about her needs and preferences so that he could fashion a dress for her in the same way that a tailor would fashion a bespoke suit for a man.

English designer Charles Fredrick Worth, who worked in Paris during the second half of the 19th century, had other ideas. Why not turn the whole process around so that the designer provided the vision for the client and dictated what she should be wearing?

In fashion history, Worth was the first designer to identify himself with an eponymous label by always having his name sewn into the garments that he produced.

“Before him, you had dressmakers, and dressmakers didn’t have this identity of artist, genius, creator, the way that C. F. Worth positioned himself. It’s essentially like putting your creative ownership and authenticating that style,” explained Emma McClendon, co-curator of the exhibition called Trend-ology at The Museum at the Fashion Institute of Technology.

This is a fitting beginning to the Trend-ology journey, which goes beyond merely featuring important trends to examine the sources from which fashion trends have emerged over the past 250 years.

The exhibition features approximately 100 objects from the museum’s permanent collection and highlights industry developments that have had an impact on how trends propagate.

“We wanted to show the widest range of sources as possible, really showing that it’s not necessarily high fashion designers but also socio-political developments, different art movements, films, music, have really had a huge impact on fashion all these things together make up contemporary culture at any given moment,” McClendon said.

Each garment in the exhibition is interesting because it signifies a turning point in fashion trends.

The two silk dresses from 1865 in vibrant blue and green pinpoint the year when synthetic dyes were first introduced to usher in a new trend for bright hues in 19th century fashion.

In the early 20th century, orientalism became a strong trend that borrowed from China’s Qing Dynasty-style tailoring. This resulted in a less structured look that eventually moved into the Hollywood-era bias-cut dresses.

Documented in the exhibition is also the birth of the “American look” pioneered by designers Claire McCardell and Tom Brigance as an alternative to the French look. It was sporty, emancipated, and it fitted well with the car culture that became prevalent in the United States in the 1950s.

Travel started to have a bigger influence on trends from the 1960s onwards. Airplane travel exposed designers to exotic locales, resulting in a kaleidoscope of color combinations and patterns. Oscar de la Renta’s multi-colored caftan (1963) and Emilio Pucci’s printed silk jersey dress (1970) exemplify the long life of this colorful trend.

“Once you get past the ’70s, [color] does tend to get more muted. But if you look back a year or two ago you had that trend of all the neons. It does depend on where you live. In New York, we’re very black-centric, whereas in Los Angeles everything there is very bright,” said exhibition co-curator, Ariele Elia.

Looking at the exhibition as a whole, allows us to take a step back and perhaps gain a new perspective on the whole fashion trend paradigm.

The way in which a new trend becomes accepted seems to follow a certain pattern.

Take the mini-skirt for example. Designer Mary Quant spearheaded the change with her new design signaling a shift in attitudes. Initial shock soon turned to absorption into the culture, and eventually, it became the status quo. This was then followed by a counter-reaction. In the case of the mini, it was followed by the maxi.

If neon colors are in one year, you can bet neutral colors or black will follow—this trend itself being superseded by a wave of color, and so on ad infinitum.

Nowadays, this pattern—resistance, absorption, status quo, counter-reaction—may not apply entirely, as there may not even be any initial resistance to a new trend.

The life cycle of a trend is shorter and the speed of information has conditioned us into tacit acquiescence. After all, if we don’t like something, we know that all we have to do is wait a couple of months before it all gets turned around again.

The exhibition also shows how at a point in time, logomania started to grab ahold of designers’ imaginations.

In 1991, Karl Largefeld incorporated the “dookie” chain (usually worn by hip hop stars), hanging from it the “Chanel” logo in large capital letters, as an accessory to the Chanel suit.

This was followed by Moschino’s “labeled garment” comment sewn over the top of his gigantic “MOSCHINO” logo. Humor, it seems, is all it takes to counter-balance unashamed self-promotion.

But the bigger issue here is that while logomania grew, fashion innovation was scarce. One might even be compelled to conclude that it was a ploy to cover up the lack of innovation.

Coming up to the present, it feels as if fashion comes to a grinding halt with Rad Hourani’s unisex ensemble from 2013. There is an absence of color, and the word unisex is loud and clear, though the garments themselves don’t necessarily reflect this.

Video footage of the models wearing the collection reveal that while the women still maintain their femininity, the male models look decidedly effeminate when wearing the same clothes.

But what is both important and disconcerting here is Hourani’s deliberate and forceful aim to de-gender fashion. A photo of the backstage directions that stands alongside the garments on display reads, in bold, capital letters: be pure, be unisex, be couture.

Is this the official recognition of where we are heading? Could it be that after centuries of color and clearly distinct styles for men and women, we’ve grown so tired that all we crave is an androgynous, color-less uniform?

Increasingly, trends have become reactionary to the previous trend, rather than by inspiration from independent, artistic influences. So perhaps this is also temporary.

What Goes Around, Keeps Coming Around

One can feel the dilemma of designers and the desperate and exponential speeding up of recycling old trends for lack of new inspiration or a totally new vision.

The fashion industry is screaming out for a revolution, now that it has gone through the whole gamut of phases, waxing, and waning between the over-embellished or brightly colored to minimalism, deconstruction, unisex, black.

Black is the non-color of our daily uniform. Try as hard as we may, we cannot seem to escape its simple grip. And if we remember that the progression from black to white is various shades of gray, we would have to admit that our everyday work wear is predominantly found in this range of shades. We call them “basics” around which we are meant to build, in theory.

We have become blank, or rather black, canvases. We have dug ourselves into a dead end. Where to go from here? Do we dare to trust designers to show us the way? If there is going to be a true fashion revolution, who will lead the way?

We should at least have the courage to brainstorm a possible answer and stop destroying and deconstructing, but start rebuilding on clear foundations.

Trend-ology will be on view through April 30, in the Fashion and Textile History Gallery at The Museum at FIT.