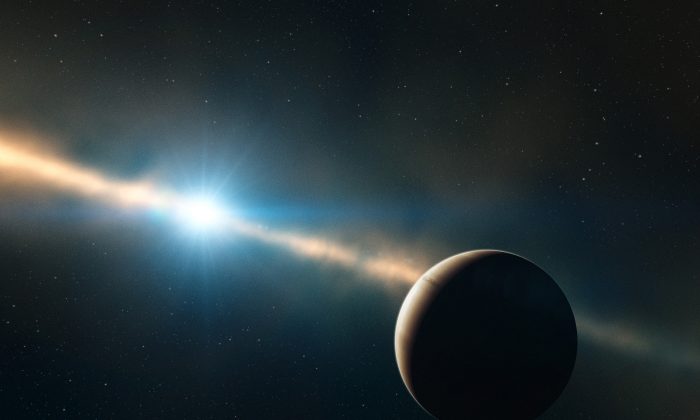 This artist’s view shows the planet orbiting the young star Beta Pictoris. This exoplanet is the first to have its rotation rate measured. Its eight-hour day corresponds to an equatorial rotation speed of 100,000 kilometres/hour — much faster than any planet in the Solar System. (ESO/L. Calçada & N. Risinger/Skysurvey.org, CC BY-SA)
Science

Over the past two decades, almost 1,500 exoplanets have been discovered orbiting distant stars – but Dutch astronomers have determined for the very first time just how fast one of those exoplanets is spinning on its axis.

In a paper published in Nature today, the exoplanet – Beta Pictoris b – has been measured to rotate at almost 100,000 kilometres an hour. In other words, a day on this planet lasts just eight hours.

This is faster than any of the planets in our solar system. Jupiter, the solar system’s most massive planet, takes 10 hours to spin once on its axis, which in comparison is almost leisurely.

Using the Very Large Telescope (VLT) of the European Southern Observatory (ESO) at Cerro Paranal in Chile, and a precise technique called high-dispersion spectroscopy, astronomers measured how the wavelength of light changed across the planet (to a precision of one part in a hundred thousand).

This allowed them to detect the “rotational broadening” of lines in the planet’s spectrum, the signature of its rapid rotation.

The planet orbits the southern star Beta Pictoris, which is relatively nearby at just over 63 light years from Earth. The star is bright enough to be seen with the naked eye – a rarity among stars known to host planets.

Exoplanets are most often discovered using indirect means – by watching a star wobble back and forth (known as the radial velocity or Doppler method) or by seeing a short dip in the star’s light as the planet moves by (the transit method employed by the Kepler Space Telescope) – but not Beta Pictoris b.

It was discovered in 2009 because it was actually seen in observations taken with the VLT. In fact, the planet was first imaged back in 2003, but was only uncovered when the data was re-examined years later. Combining this observation with those taken in 2009 and 2010 allowed Beta Pictoris b’s orbit to be mapped out.

Beta Pictoris b is one of just eight exoplanets for which direct images have been obtained.

A Trend That Hints at Planet Formation?

The detection of Beta Pictoris b’s rapid spin is particularly interesting when considered alongside our own solar system.

Beta Pictoris b is thought to be roughly 10 times more massive, and at least 1.5 times wider, than Jupiter. When its mass-to-spin ratio is compared to the planets of our solar system, it correlates nicely.

It’s not yet certain why some planets spin fast and others more slowly, but co-author Remco de Kok suggests that the trend seen here “must be some universal consequence of the way planets form”.

For giant planets, such as Jupiter, Saturn and Beta Pictoris b, the trend can be interpreted as part of the “core accretion” model used to describe planetary formation.

A young fledgling star is surrounded by a disk of gas and dust. Over time, small grains of solid material within the disk collide with one another. If their relative velocity is low enough, the grains can stick together.

This process builds until objects are massive enough that their gravitational pull acts to speed their growth, pulling ever more material towards them. Eventually, planets can gain sufficient mass that they begin to accrete a gaseous envelope – a process that has the side effect of causing those giant planets to “spin up” as they “slurp up” gas from their surroundings.

This is the classic result of the conservation of angular momentum and is played out every time a spinning figure skater draws in their arms to spin faster and faster (see video below).

Not the Whole Story

But there is a catch. The massive planet Beta Pictoris b is still very young – only about 20 million years old (that’s in comparison to Earth which has been around for 4,500 million years).

The planet is most likely still bloated, swollen from the latent heat of its formation. As it cools and contracts over the next tens to hundreds of millions of years, it will likely “spin-up” further, turning ever faster on its axis.

On the other hand, external forces can’t be ruled out either. For instance, the Earth’s spin is slowing down over time due to the tidal interactions with our moon.

Hidden within the paper is a second result measuring the amount of time it takes Beta Pictoris b to orbit its sun.

The planet is currently moving towards the Earth and there has been speculation that when it passes between Earth and its parent star (known as an inferior conjuction) it may cross directly in front of the star.

This possible transit is likely due in late 2017 or early 2018, based on the new estimate of a 17-20 year orbital period. This ties in nicely with tentative evidence that a previous transit was observed back in 1981.

Certainly, astronomers across the globe will be focusing their attention on Beta Pictoris in the coming years. A transit will allow the diameter of the planet to be precisely determined and enable astronomers to probe the composition of the planet’s atmosphere.

The authors do not work for, consult to, own shares in or receive funding from any company or organisation that would benefit from this article. They also have no relevant affiliations.