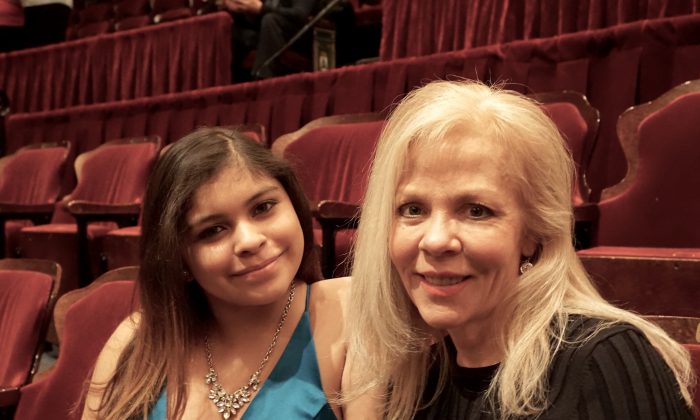 DETROIT—January 1 marks the start of a new year for all, but this evening at the Detroit Opera House Shen Yun Performing Arts brought of 5,000 years of Chinese culture to life for theatergoers in the Motor City.

Through music and dance, Shen Yun seeks to take one on a journey through China’s history using 20 or so vignettes that showcase ancient legends, modern heroic tales, and the harmony between heaven and earth.

Ms. Banas explained how the beauty of Shen Yun is something that reveals itself in a peaceful way. The beauty also appears in the legacy and the history of the dance which arose over thousands of years.

Being somewhat familiar with Chinese culture because of having visited China firsthand, Ms. Banas believes Shen Yun is a good educational experience for Western people who are unaccustomed to Chinese culture.

She felt the music from the live orchestra was not only wonderful, but very representative of the culture. “It feels very authentic and real, I feel that we’re actually experiencing the music by artists who played the music for a long time,” she said.

“The Shen Yun Orchestra combines the spirit, beauty, and distinctiveness of Chinese music with the precision, power, and grandeur of the Western symphony orchestra. The result—two great traditions producing one refreshing sound,” according to the company’s website.

Her daughter Bella was impressed by the beauty of the performance. She said, “It was beautiful, all of it was just really, really, pretty, and the dancing was amazing.”

The 14-year-old, who’s a student of Mandarin Chinese, called Shen Yun a “beautiful, authentic, Chinese dance experience” and a combination of dance and theater that wasn’t exclusively dancing. “There’s a much deeper experience than just the dance component,” she said.

He believes that sometimes people in America forget that China is not only very populated, but that there are at least as many, if not more, geographic regions in China as in the United States. Mr. Barnes thought it was fantastic how various regional differences were illustrated through the backdrops and the costuming.

Paying close attention, Mr. Barnes noticed some of the fine details in the digital backdrops, even down to the tiles of the roofs in some of the structures. “You can see the whole thing coming together,” he said, commenting on the three-dimensional aspect of the backdrops and how the dancers interact with it.

According to Shen Yun website, the backdrops are designed to be true to life and to allow the viewer to forget where they are.

Accompanying Mr. Barnes to the New Year’s Day performance was MBA student from L.A., Vanessa White. She liked how the production incorporated a lot of history as well as various aspects of Chinese culture.

Everything was very elegant—very beautifully done, according to Ms. White. “I just think the beauty and grace encourages people to be excited about other cultures,” she said.

One aspect of the program that surprised Ms. White the most were two contemporary pieces that depict the persecution of Falun Dafa. “I really appreciated that,” she said.

Falun Dafa is a peaceful meditation discipline that follows the guiding principles of truthfulness, compassion, and tolerance. It has been brutally persecuted by the communist regime since 1999.