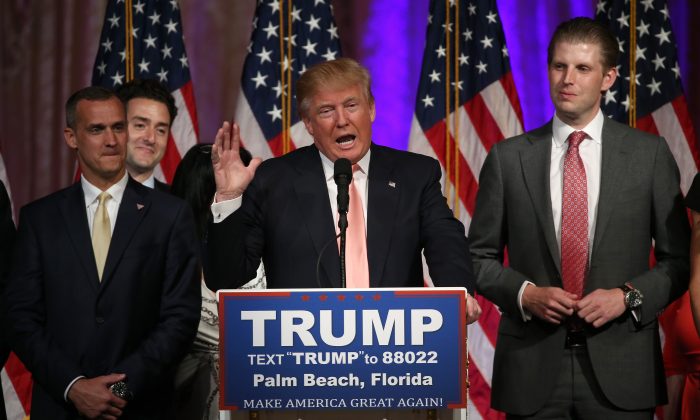 Donald J. Trump is known for putting name on his hotels, a university, and even steak, in an attempt to make the products more marketable. In China, businessmen use Trump’s name to sell flush toilets and air purifiers.

In 2002, Shenzhen Trump Industries set up operations in the province of Guangdong in southern China. The company sold high-end toilets for private and public use, with features like automatically-placed toilet seat covers, and pedal-activated flush.

As Foreign Policy pointed out on March 14, company’s claim that it has solved “the problem of toilet hygiene on a global scale” and has a billion “users” each year, echoes some of Trump’s own boastfulness. Trump the politician and property mogul is promoting his candidacy as an effort to “make America great again.”

And then there is the electronics company Trump XP, established in 1996, with offices in Shanghai. The company is known for its line of air purifiers.

Internet users said that the leading candidate for the Republican presidential nomination should be glad that his name is being used to sell toilets in China.

“ID_3053784” from Jiangsu Province wrote: “Mr. Trump should rejoice. This toilet company is bolstering his popularity and helping him to eliminate bad smells.”

Beijing netizen “A witch with a heart and lungs” wrote: “This time, his notorious name has spread overseas with this toilet.”

According to Trump’s financial disclosure forms, filed for his presidential candidacy in 2015, there are 268 companies that Trump has licensed his name to use. Both Shenzhen Trump Industries and Trump XP are not among them.

As observers have noted for some years, Chinese companies have a habit of leveraging and re-appropriating well-known Western brands.